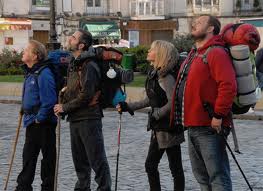 The Way begins by introducing us to Tom (Martin Sheen), a Californian ophthalmologist who has an uneasy relationship with his son, Daniel (Emilio Estevez). Only minutes in, Tom gets a call from France and learns that Daniel has been killed in an accident. He flies to St. Jean, where Daniel’s body is being kept, and discovers that his son died beginning the Camino de Santiago. This is the pilgrim’s route to Santiago de Compostela in Spain, where it is said that St. James is buried. It is a journey that has been made by foot for centuries, for many different reasons.

Despite his disapproval of Daniel’s desire for a nomadic lifestyle, when Tom learns of his son’s planned journey, he decides to take on the challenge himself. Along the way, he finds a group of wanderers to share his time with (although at first he is not keen to do so). Joost (Yorick van Waganingen), a Dutch party animal hoping to lose weight, joins him first. Sarah (Deborah Kara Unger), an angry Canadian trying to give up smoking comes next and Jack (James Nesbitt), an Irish author hoping to cure his writer’s block completes the quartet. As the walk stretches on through Spain, the group begin to learn more about each other and themselves, while Tom starts to confront his grief.

The four central characters make this film what it is: a deeply emotional and incredibly human story of loss, acceptance and trying to change your life. Van Waganingen as Joost is particularly special; with his happy charm and amusing enthusiasm for sampling the local food despite doing the walk to lose weight. He seems more like a friend than a movie character, as do all four of the leads. Sheen as Tom seems tough and unemotional at first, but the character soon invites you to be on his side and experience his journey with him. The chemistry between the group as a whole is simply perfect, especially towards the end.

The entire film is visually pleasing, as one would expect from a movie set in France and Spain. However, the final few scenes when the pilgrims reach their destination are nothing short of breathtaking. After such a long build up to the moment, these scenes are deeply moving. The characters have been developed in such a way that it is clear what reaching the end of the journey means to each of them, and the moment they enter the church in Santiago de Compostela is constructed perfectly.

As well as being highly emotional, the script is funny, with plenty of light-hearted and self-deprecating humour to balance out the seriousness. As Tom begins to share his grief with his companions, the film takes on a much more positive tone, and you may find yourself wishing that their walk would go on forever, so that the film would never end. A movie for travel addicts, lost souls and anyone in need of a healthy dose of inspirational storytelling, The Way has much to offer.