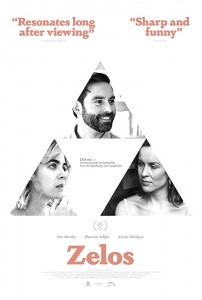 Zelos is a story of cheating. You have probably seen a lot of films like this, but what makes this one different is its realism. And unlike so many other films about cheating, this film is: written, directed, and co-produced by two young women (director Jo-Anne Brechin and writer Claire J Harris) and ALSO has a young woman in charge of the cinematography as well as a bunch of other women in technical roles. Allow me to hold off talking about the plot for a moment while we applaud the triumph of making a film with the best people for the job regardless of gender – such an obvious, but in our time essential, choice brings attention towards women in film. It is also perhaps these selections that make this film very thoughtfully shot.

Now back to plot. We open with a fabulously romantic scene – two lovers in bed wearing socks, chatting and napping – adorable. So what happens next? Tagged as a ‘coming-of-age story for thirty somethings’, Zelos follows thirty-something Bernard (Ben Mortley) as he struggles to make decisions and generally function after his girlfriend, Sarah (Shannon Ashlyn), cheats on him abroad. To try and quell the situation Sarah suggests that Bernard should sleep with someone else to understand ‘how little it means’.

Bernard is about the most straight edge dude you can get (his friends have to explain to him how to use Tinder, where have you been Bernard? Also you must be a rotten wing man if you haven’t helped your friends with some sneaky left right swipes, come on!). He does his shirt up all the way to the top button but when he begins to consider Sarah’s suggestion – oh no the top few buttons are open, party time. I found it somewhat unrealistic that as Bernard struggled with Sarah’s proposal, there was a sudden onslaught of women wanting to sleep with Bernard appearing out of nowhere (if you have ever been single you know this is the dream but rarely the reality).

My favourite scene in the film shows Bernard’s creative writing being critiqued by a typical writing group. One member suggests that Bernard’s story about cheating and suffering is not original and needs to be made into a sci-fi screenplay. And he’s right: the idea of cheating as a catalyst for a relationship drama is not original. But the question the film (and Bernard) seems to be posing is not whether cheating is bad, but how do we react to it when it happens?

This film is at its strongest when it is focused on Bernard and Sarah’s relationship. I found other scenes featuring interactions with friends a bit less complicated and so less enjoyable for me to watch. What was always enjoyable, though, was the film’s presentation of Sydney apartment life. The apartment became a strange in-between space of being mostly Bernard’s home, but steadily a little bit Sarah’s as well. At the same time, the home could be a light-filled happy place but quickly switch to a claustrophobic moody space, mirroring the couple’s tensions.

I’ve been reading a lot of articles by sex columnist Dan Savage of late and what I think this film is acknowledging is what Savage often says, so you cheated, so what lots of people do, and lots of couples can get over it, what now? How you get over the cheating is what is important, and in this film it is actually Bernard not Sarah who becomes the bad guy because of his envy and inability to express his feelings, which leads to a chronic level of mind games and dishonesty between the pair. There is a fantastic line from Bernard: ‘men can be more romantic than you [women] give us credit for’. This line exemplifies the film’s discussion of modern love: we are now questioning finding the one and acknowledging that really, none of us know what we are doing and what love should be/is.

Let’s go back to that opening bedroom montage (with the socks). Perhaps the past can be viewed too perfectly and that is what makes cheating so hard? Perhaps that is why we need depictions of the long drawn-out almost torturous aftermath of cheating on screen, so that when/ if it happens to us we may not begin a funny little game of guilt?

To support this female-led indie flick, head to https://www.facebook.com/zelosmovie.