film: women of the island 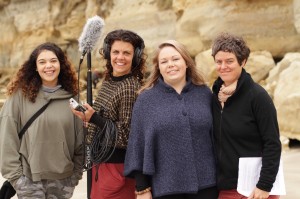 It’s a quiet Friday lunchtime when I meet Tasmanian filmmaker Ninna Millikin in Hobart’s charismatic suburb of Battery Point. I wait in a small park surrounded by nineteenth-century cottages, and we find a window seat in a cosy café nearby.

It seems appropriate that we meet in such a distinctive part of Hobart given what we’re about to discuss: a documentary web-series focused on the stories of Tasmanian women. Known as ‘Women of the Island’, the project began with a chance encounter at a local swimming pool. Filmmaker Rebecca Thomson was approached by someone who had just met a fellow Tasmanian woman with an incredible life story.

‘This woman’s history was just fascinating to a perfect stranger, and that stranger grabbed Rebecca and said you should make a film about this, which then made [her] think about how many amazing stories are around us every day,’ Millikin explains. ‘And she’s a feminist filmmaker and particularly interested in women’s stories and how they’re told.’

Thomson enlisted the help of Millikin and filmmaker Lara van Raay, who were both experienced in the documentary genre. The team took the idea to a pitching and development competition run by Wide Angle Tasmania, called Step-Out Web17, which Millikin describes as ‘like Survivor for filmmakers’. The Women of the Island filmmakers clearly have stamina, as out of 30 filmmaking teams, they were the ones left standing at the end and received production investment for their project. 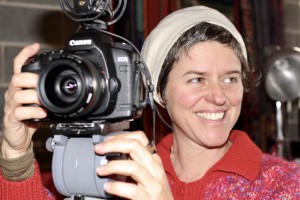 During the Step-Out Web17 process, the team called for nominations of women who could be featured in the series. They also had personal recommendations from other sources, leaving them with a database of over 100 women they can draw upon for the project. The team wants to ensure they represent a diversity of women, with Tasmania and connection to place as a binding themes.

Part of the Step-Out Web17 process involved launching and running a crowdfunding campaign through Pozible. The Women of the Island team exceeded their fundraising target and were encouraged by the support they received. ‘You know you’re doing something that has real appeal when it’s not just your friends and family contributing,’ says Millikin.

The first three films in the web series launched in August, with premiere screenings attracting a large crowd. The clips were viewed over 130,000 times in total in their first three weeks online. Each film tells a very different story about an individual woman, but they share beautiful production values and scenes of the unique Tasmanian landscape from beach, to farm, to bush.

Millikin’s first film for the series, Protector and Defender, tells the story of Madeline Wells, a Aboriginal Tasmanian woman who is active in her local community of Wynyard. In the film, Wells talks about how attending a human rights forum at the United Nations inspired her to stay passionate about the things she believes in. Shots of Wells on a quiet beach are interspersed with images of her at home with family.

The Women of the Island films are already having an effect, and this is just the beginning. The team plans to produce 20 films in total, as well as a coffee table book of ‘photo+text’ stories. Their Facebook page is still thanking new people for contributions in the form of financial donations, showing just how much momentum the project has built. They’ve even got merchandise to sell, including ‘Map of Tassie’ underwear and Women of the Island T-shirts.

This unique project is evidence of the inspiring work that women filmmakers can do together. Millikin points out that each of the women involved are also juggling care responsibilities for young children as well as other work, so it’s clear how important this project is to its creators. ‘Collaborating with other women filmmakers has been wonderful because I’m used to working by myself,’ she says.

This collaboration continues, with the team currently busy making more stories. As Tasmania’s star rises with the popularity of MONA and its associated festivals, this project offers a personal look at what it’s like to be a woman of the island.

Find out more about Women of the Island and view the films so far here.

Rosie Hunt is Lip’s film editor. She tweets at @roseh11.