hillary clinton biopic to be directed by a dude 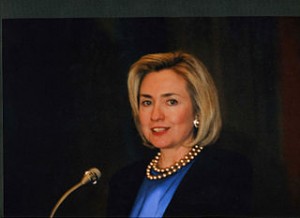 It’s basic fact that Hillary Rodham Clinton has worked and continues to work extremely hard to promote women in leadership roles. She’s a powerful figure on the international political stage, and she’s a great role model for just about everyone given her resilience, intelligence and strength which have seen her achieve some fantastic goals.

It comes as no surprise that Hollywood want in on her growing empire of success, and has pitched a biopic to be made about her early adulthood, entitled Rodham. This film has generated interest and discussion in both political and entertainment spheres, given its content and the prestige associated with playing such a monumental figure in modern world history.

But what has generated even more discussion is one key decision about the film – the director. The person who landed the job is one James Ponsoldt; whom you might recognise from his feature films Smashed and the upcoming The Spectacular Now (or you might not recognise him at all).

However, it is not his directing prowess or his prior films which are the topic of debate as to how he will handle Rodham, but rather the fact that he is a man. Directing a film about a woman who has worked tirelessly to promote women’s leadership.

Seem a little off to you? It certainly does to me.

The appointment of a man at the helm of a film of such potentially epic proportions is a strange choice. It is essentially putting a very significant chunk of the portrayal of Clinton’s life into a man’s hands – something which she advocates so strongly against.

The problem at hand here isn’t with Ponsoldt himself. The criticism towards his appointment has not been with malicious regard for him or his body of work. There is a larger problem at work here.

It is that by putting a man in charge of a film about a woman’s life, Hollywood is essentially saying that women are rendered incapable of being in charge of big projects. As this article observes, there is no suggestion that any women were even considered for the position of director for this film. The writer also suggests that there is little hope for female directors in Hollywood if they are not even interviewed to do a film about Hillary Clinton.

Although this may seem a little dire, there is a fair point being made. If a woman had been hired to direct this movie, it would have made a powerful statement for the case of equality within one of the most influential and popular lines of work on the planet. However, an equally powerful statement about the workings of the film industry has been made instead. It’s a giant slap in the face to all of Clinton’s standpoints, really.

To make matters worse, the producers who are being linked to this project are most well known as the team behind the Twilight film franchise. That’s right, the minds behind teen vampire romance films are lined up to produce a film about the most powerful and influential woman on the planet right now. Now that just doesn’t seem right in any way to me.

The team of producers behind Twilight are also behind the now popular American television series Revenge, which, despite its powerful characters and majority female cast, has never hired a female director across the two seasons and forty-two episodes that have been screened to date. It seems that the behind-the-scenes working of big Hollywood productions are falling by the wayside when it comes to gender equality in production.

How does the woman herself feel about all of this, you might ask? Well, as yet, there has been no word from Clinton herself with regards to any of the decisions regarding her biopic. But we can only speculate what sort of a reaction she might have had, or might publicly declare.