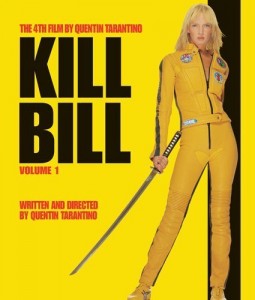 In my opinion, the most empowering heroine to ever be seen on film is Beatrix “The Bride” Kiddo from Quentin Tarantino’s Kill Bill Vols. 1 & 2. I can confidently say that she changed what feminism meant to me, and at a very young age inspired me to become the feminist I am today.

I first saw Kill Bill Vol. 1 when I was 13 years old. Sure, that’s probably not a great age to be watching an R-rated ultra-violent, revenge fantasy flick; but I was at my friend’s house, it was 1am, and we wanted to watch something awesome. I don’t want to sound melodramatic, but watching Kill Bill that first time literally changed my life. Up until that point, most of the female characters I had seen in movies were flimsy plot devices there to help develop a male character’s narrative; or if they were leads, they were either of the wimpy rom-com or crazy-bitch variety.

But here was The Bride; so incredibly strong, smart and simply super awesome. I admired her courage and determination, not to mention the themes the film itself tackled, such as female power, female guilt and motherhood. Never had a Hollywood film – made by a male director, might I add – tackled such important and critical feminist issues as Kill Bill did upon its release. Furthermore, Tarantino was able to examine these issues in such an upfront yet ‘cool’ way that it was impossible not to take notice of them.

Beatrix “The Bride” Kiddo (played by the amazing Uma Thurman) is the deadliest woman in the world, an assassin in the Deadly Viper Assassination Squad. When she discovers she’s pregnant to her lover and boss, Bill, The Bride decides to leave the Squad and start a fresh life. She wants to go as far away as she can from the cruelty and violence of the world she’s a part of, for the sake of her unborn child. When Bill finds out, he arranges The Bride’s assassination at the hands of her former squad. Left for dead at her wedding, she falls into a four-year coma; when she awakes, she finds her baby gone and her life shattered. She sets off on a path of revenge, planning an attack on the people who wronged her, using all her strength and determination to track down the five members of the Squad – and, of course, Bill – and kill them off one by one.

Although the film’s narrative is obviously implausible, the character of The Bride is so realistic, raw and complex that she is considered to be one of the greatest film characters of all time. There are some astonishing moments, in both films, where The Bride is forced to use not only her physical strength, but also her mental strength to get out of a sticky situation. Immediately post-coma, she fends off an attack, despite barely being able to move. In escaping from the hospital, she faces the painful task of teaching herself how to walk again. In Vol. 2, after being tranquillised and buried a-fucking-live by Bill’s loser brother Budd, she literally smashes her way out of the six-feet-under coffin to freedom.

It is incredible just how much of an impact these scenes, and the films overall, have had on my feminism; I still vividly remember the first time I saw both of them. I instantly fell in love with their empowering nature and with how they feature strong, intelligent and three-dimensional female characters (just like we are in real life, who would have thought).

When I found out that feminists had criticised the film at the time of its release, I was surprised, but I also just had to laugh. Some claimed it promoted objectification of women, and others thought that a film about female empowerment should have a “realistic” storyline. But I often wonder how anyone who has actually seen the film would think it was about objectification instead of empowerment.

The Bride is never objectified for her looks and although her combat ability is something she has learnt from others like Bill and Pai Mei, she quickly overtakes her teachers. The fact that she is a stereotypically beautiful woman doesn’t downplay her strengths, her looks are not what defines her. She’s definitely the most complex character Tarantino has ever created; she’s realistic, independent and we greatly sympathise with her and her journey. On one hand, she has a violent passion within her to seek revenge, yet she has a kind heart and is at times extraordinarily logical and compassionate for someone hell-bent on vengeance. At the closure of Kill Bill Vol. 2 when she is reunited with her lost daughter BB, we are shown what The Bride wanted to become all along: a caring mother and role model for her daughter.

Furthermore, the universe that QT has created in Kill Bill is (almost) entirely controlled by women. Think O-Ren, Elle, Vernita, Gogo, Sofie; they’re all powerful female antagonists in The Bride’s journey. The male characters, Bill and his brother Budd, are far less interesting than any of the female characters.

That’s why I don’t understand the criticism of the film. To me, The Bride’s strength, courage and determination is clearly incredibly empowering. She shows that women can be powerful warriors and fighters, yet also have heart and reasoning to ground them. The films do not guilt women into feeling like they must be placed into categories like mother, whore or maid, but they rather fight these stereotypes of how woman in films should be represented.

7 thoughts on “kickass feminists on film: kill bill’s the bride”