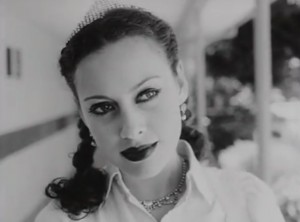 For the generations before us, the name Coppola brings to mind moustachioed mobsters in The Godfather and the capital-c ~Cinèma~ of Francis Ford Coppola. But for me, and many millennial women, it’s the soft cinema of his daughter, Sofia Coppola, that we think of — though her career very nearly took a different path. She landed her first acting role as the baby in the baptism scene in The Godfather, and 19 years later her return performance as Michael Corleone’s daughter in Part III was panned by critics, to the extent that she was blamed for declining box office sales and damaging her father’s reputation.

Thankfully, this experience did not deter a young Coppola from pursuing a career in film, albeit behind the camera. Her unique ability to chronicle the melancholy that comes with a certain kind of girlhood — shall we say, upper-middle class suburban ennui — has been central to the formation of ideas about identity and self for a generation. Her fascination with the plight of young women and championing of the sad-girl aesthetic has come to be a defining feature of her authorial style, crystallised in the scene from her debut feature, The Virgin Suicides (1999), when the exasperated doctor asks his young patient, ‘What are you doing here honey? You’re not even old enough to know how bad life gets,’ to which she replies, ‘obviously Doctor, you’ve never been a 13 year old girl.’ Today, I see her touch in the dreamy, hyper-feminine aesthetic of Petra Collins (who discovered by Rookie founder and known Coppola super-fan, Tavi Gevinson), and in the hazy nostalgia of Lana Del Rey (the reason why we are yet to see a Coppola-directed LDR music video yet, I cannot fathom). In honour of it being 20 years since Coppola’s first foray into directing, I’m taking a look back at where it all began with her 1998 short, Lick the Star.

The drama takes place in that fraught period of early high school, where one feels caught somewhere between a child and something else. Puberty is cruel, and in world where for young women, this transition can feel more like a shift from person to object, it’s all the more distressing. The weight of it sits heavy on their shoulders, caving inward to shield the budding on their chests from prying eyes, skirts nervously tugged over thighs when riding on the bus. But in every cohort, there’s a few curious creatures who somehow know not to fear their new bodies. It’s not something that can be fully understood, but they sense the power in it. They have noticed men’s eyes wandering up their legs, following them as they leave the room. They have learned the strange currency in the sweetness of a smile, or the bat of a lash. These wiles may still be a little unwieldy in their newness, but when they manage to pull it off, they can get people — men and women alike — to do what they want.

Chloe (Audrey Heaven) is the latter kind of pubescent: Queen Bee, and a typical Coppolian protagonist — young, bored and misunderstood. In just 13 minutes, Coppola deftly captures the subterfuge of high school girls and the ever-shifting allegiances which look unrecognisable from one week to the next, depending on who has the best access to those most valuable commodities — boys, alcohol, and knowledge of sex. Through the eyes of schoolmate, Kate (Christina Turley), who has just returned from a week home with a broken leg, we find that Chloe, femme fatale in-the-making, has devised a Flowers in the Attic-inspired plot to weaken the boys who taunt her at school by spiking their lunches with rat poison. While I don’t condone violence, I can empathise with Chloe’s situation. Fed up with being objectified and harassed, and unencumbered by a fully developed prefrontal cortex, I can see how poisoning your enemies might come to seem like a good idea.

The visuals of Lick the Star will appear familiar to fellow sad-girl fan-girls. Echoes of the bombastic title sequence — freeze frames splashed with bright font set to a punk-lite soundtrack — can be found in the opening credits of Marie Antoinette (2006), or more recently, The Bling Ring (2012); while the shot of Kate staring wistfully out of the car window brings to mind Bill Murray’s Bob Harris in Lost in Translation. Another hallmark of a Coppola film is her richly hued pastel dreamscapes, which can make the absence of colour from Lick the Star seem out of place — though the dreaminess is not completely lost in the monochrome. The lighting, as always, is soft. In the schoolyard, diffused by a canopy of leaves overhead, the dappled light makes the girls almost sparkle, and lounging poolside in contemplation of their victims, refracted light dances across their faces, tightly framed but made glowy by the shallow depth of field.

While not without its imperfections, Lick the Star is a compelling vignette of the heart-wrenching politics of girlhood in the schoolyard. It’s tempting to say that the dialogue and delivery is at times cringeworthy, but in some ways I think it honours the awkwardness of adolescent interactions. It may come off as a little melodramatic, a little too caught up in its teenage profundity (‘Everything changes. Nothing changes. Tables turn. Life goes on’), but I think it it’s precisely this earnestness that lends so much authenticity. Coppola has a way of treating the intense emotions and vulnerability of young women with the same gravity and respect they are routinely denied. To be a teenage girl is to live in an exhausting paradox: emboldened by newfound agency and giddy with possibility, yet weighed down by the pernicious knowledge that privileged as you are, this world is still not made for you. In Lick the Star, and many of her works, Coppola captures the tension, angst, and misdirected rage young women experience as they come to the realisation that, after all, this is still a man’s world.

Nat Pitcher is a writer and audio producer in Naarm/Melbourne. She tweets and snaps pics as @dj_problematique, but Soundclouds under her real name.