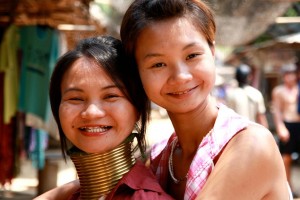 Far away from the chaos of Bangkok lies the North Western province of Mae Hong Son. A mountainous landscape, much of the region is sprawling with rainforest and is said to be curtained by mist the year round.

You can travel by jeep or motorbike, bouncing over potholed roads, to your choice of one of three Long Neck Villages. Once you pay your entrance fee, the gates open to an assortment of thatched wooden huts with colourful cloths hanging from beams. The generous greenery sways above. Roosters crow. And you can take photos of the Long Neck women.

‘It’s just a giant shop,’ says filmmaker Shalom Almond. ‘It’s surreal—the experience is completely set up for tourists. The people there have no land; there’s nothing for them to do there besides sell their products. And there’s no men, because they don’t wear the rings on their necks.’

In the opening scene of Shalom’s new film, My Long Neck, a little girl of five or six with smudges of coloured paint on her face is having brass coils wound around her neck. ‘It feels funny,’ she says. ‘I don’t want it,’ she cries.

The Kayan, or Long Neck Karen, are Burmese refugees whose tradition is encouraged both by rightful pride and tourism dollars. Putting the rings on is a lengthy process, and the brass rings are bought from Burma; both physically and economically, it’s a huge personal investment.

‘The rings can weigh between six and ten kilos,’ says Shalom, ‘Some people believe that the ring stretches the neck, but it just pushes down the collarbones and shoulders and exposes more vertebrae. And no, their necks don’t get weaker—in fact, the muscles compensate for the weight of the rings, and their necks get strong.

‘It’s as women get older that sometimes they can have complications. Because the rings compress the diaphragm, they can develop breathing problems.’

Even then, many women refuse to take them off; they’re proud of their tradition.

Shalom read about what some people call a ‘human zoo’, and the young Kayan women within them who have taken off their rings in protest. With this knowledge, she visited a Long-Neck village in Mae Hong Son. Humbled by the blatant division between tourist and subject, she put away her camera. Instead of taking photos, Shalom struck up a conversation with 26-year-old Maja, who ‘looked more like an exotic Japanese pop princess than a poor Burmese refugee’. Maja invited her into her house.

‘When I got back to Australia, we wrote letters to each other. Her husband knows a bit of English. ‘

No internet? No emails?

Shalom laughs. ‘No, she has no access to the Internet.’

This is because the villages are run with business in mind. To sell an authentic tourist experience, modern conveniences are not allowed.

‘The people who own the villages don’t give them electricity,’ says Shalom. ‘So (the inhabitants) are forced to live primitively. They love their tradition and their culture, but they want to progress, they want to learn technology. ‘

Following a brutal military regime in Burma in the 80s and 90s, many Kayan families have passed through the Thai border as economic refugees. It is said that 600 populate the villages in Mae Hong Son.

‘They come across for a chance to make money from wearing the rings,’ Shalom says. ‘The Thai government allows business people to go into UN refugee camps to find Long Neck women and invite them to go into privately-owned villages.’

Once the families begin work in the villages, they cannot leave. If they are found outside the premises, they will be arrested and returned.

So is it positive to give these Burmese refugees jobs for private profit?

‘It’s so complex and I struggled with this the whole time I was making the film. And so do the women involved—they’re aware they’re being exploited, but they do have an opportunity to make good money in the high tourist season. And it’s very difficult to leave.

‘I am interested in my relationship with Maja as a tourist. When you go there, you become so aware of white privilege and the power dynamics.’

My Long Neck is sobering but hopeful. As well as revealing the injustice of the situation, it’s about individual agency: for most of the documentary, Maja is behind the camera.

‘Over the course of the film,’ Shalom says, ‘I watched Maja’s amazing transformation from depicting her culture to awareness of exploitation.’

There are scenes of dance. Of music. Of beautiful, beautiful traditional dress. And then Maja asks her sixteen-year-old sister if she made the right decision by leaving school to get married and work in her mother’s shop. And then Maja is asked whether she wants her daughters to wear the rings.

My Long Neck asks the question about the children’s future, proving a tender experience for viewers. Shalom herself had her first child, Lotus, during the production of the film. ‘She’s been on six overseas trips and she’s only one!’

Considering the complexity of the situation, she reflects. ‘It’s so easy to go there and think about them as victims. But they don’t see themselves as victims. ‘

This is obvious. When Maja holds her camera selfie-style (we see her neck rings, her coloured eye-shadow), in her face there is strength. There is self-worth. There is pride. And her depiction of the village also bears witness to the joyful laughter of fellow women.

Shalom talks about showing an uncut version to Maja and her sister. ‘After it ended, they sat in complete dead silence. Maja finally said, “Now that I see this, I understand what you are doing. I thought it wasn’t important. Now I know the power. Now I know this is the most important thing I can do.”’

So did Maja takes her rings off?

‘Well,’ smiles Shalom, ‘You’ll have to wait to watch the documentary for that.’

My Long Neck premieres in Adelaide at DocWeek Sun 9 March at 4pm. For all other screenings, visit http://mylongneck.com/