small screen sirens: why you (and everyone you know) should be watching parks & recreation 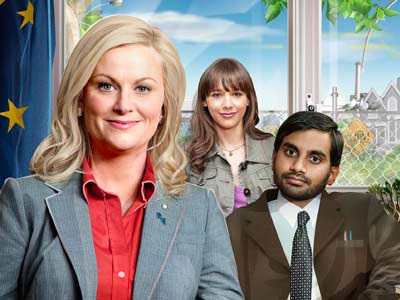 There’s something about dramatised politics that makes for compelling TV. The concept is one that’s fascinated me for a long time, especially given our apparent disengagement and dissatisfaction with politics as a nation, and our lack of faith in our leaders to, well, lead. The popularity though of fictionalised government narratives remains huge, from shows like The West Wing and Yes, Prime Minister to the more recent Political Animals and The Hollowmen. All of these shows are witty, well-written and focused on reform, the advancement of society and policy and do so through the use of comedy, character and open dialogue.

One of my favourite shows at the moment is Parks & Recreation, an ensemble-casted dramedy focused on the Parks government department in the small, fictional town of Pawnee. I came to the Parks party pretty early due to my insanely large lady crush on Amy Poehler (who you might remember as Regina’s stage mum in Mean Girls), and whilst there are a few stop-starts in series one, the show finds its footing and its heart in the fantastically tender and hilarious ensemble cast, from the libertarian department head, Ron Swanson, twisted intern, April, nurse-turned-embodied-citizen-protester, Ann, and government employee but secretly blinged up social entrepreneur, Tom. It’s Poehler who steals almost every scene though as the blindly optimistic, intelligent and genuinely hardworking, Leslie Knope, deputy director of the department. The big beating heart of the show.

Through Leslie, Parks narrates a constant sentiment of optimism in government, the created family and friendship, and has probably some of the most honest and diverse representations of all three that I’ve ever seen on television. In particular, the relationship between Leslie and Ann (ovaries before brovaries) and Leslie and Ron rings beautifully of very different people exercising enormous levels of respect for one another. It’s a show that puts tangible value on women’s relationships with other women, as well as their relationship with men that they aren’t related to or sleeping with, a feature sadly lacking from most shows currently on television.

The whole thing is held up by a cast so full of quirk; the characters sharing traits that are endearing and detestable, but ultimately always redeemable. It’s a show that never gives up on the inherent good in people, functioning on the belief that some people act bad, or do shitty things, but that doesn’t make them bad people. None of it feels contrived, and the writing is never lazy. It’s a series that works as hard as its protagonist in developing character, surprising its viewers and, at the risk of sounding horribly cliché, building a department that you can believe in. More than that though, it’s a show which calls for faith in government again, and it does so not by preaching, but by working hard for your attention, making you root for little park festivals and for legislation and for the public servants that believe they can make a difference, one park bench at a time.

(Also, it’s just so funny. Leslie’s inability to lie well is still so, so hilarious to me. Her montage in the camping episode is one of my favourite things ever)