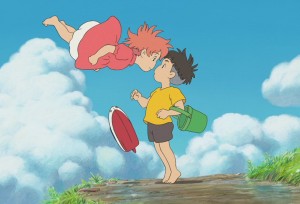 When I signed on to write a film column featuring the Studio Ghibli films, I was thrilled. While I may not be an expert – yet – on the expansive collection of animated films, I have certainly seen enough to be hooked. Over the past couple of weeks as my deadline for this review (and numerous uni assignments) loomed, and my toddling son and I were rendered mildly incapacitated (and mad) by illness, I began to panic. Then all of a sudden, the solution hit me – Ponyo!

Well, okay, a movie isn’t going to get my assignments written or anything, but having it on-loop on the tablet has kept my son out of my hair for a few solid hours. Which is really the best a parent can ask for, sometimes.

For those of you not yet in the know, Ponyo or Ponyo on the Cliff by the Sea (2008) – Gake no ue no Ponyo in its original Japanese – is the delightfully enchanting story of the friendship between a five-year-old boy and the goldfish princess he finds washed up on the seashore. Ponyo, the goldfish girl, takes a great liking to S?suke after he finds her, and from then on decides that she would like to be a human. Ponyo’s family background is elaborated on a little bit – as are her magical abilities – and her powerful yearning to be human leads into an entirely different world of problems, especially when S?suke’s family recognise her as a revered goddess so powerful that it creates an imbalance in nature. Ultimately, S?suke is presented with a test to determine whether or not Ponyo can stay living as a human. If he fails, she will turn to sea foam. I don’t want to give the ending away, but from the picture of the very innocent and pure-hearted film that I have built up so far, it is probably obvious where this is going anyway. Even so, it is less the plot and more the small in-between moments that will leave you captivated – Ponyo’s peculiar fondness for ham, S?suke proclaiming with certainty that he will ‘love ALL the Ponyos!’ S?suke’s family too are portrayed in a favourable light, with his mother displaying a humorously tolerant and welcoming perspective towards Ponyo’s sudden appearance in their family’s life. This is particularly noteworthy because of the comparatively poor and disconnected portrayals of adults in many other children’s films. Conversely, Ponyo depicts the goodness in the ordinary as well as the strange.

Studio Ghibli, the company that produced Ponyo, is often heralded as ‘the Japanese version of Disney’, and an easy example of this in Ponyo is  the inspiration obviously drawn from the tale of The Little Mermaid, both the Disney version and the original fairytale by Hans Christian Andersen. While Ponyo alludes to some of the harsher parts of the original, however – including the aforementioned possibility of turning into seafoam, welp – it manages to remain painstakingly gentle and charming. The heart of Ponyo’s success lies in the film’s ability evoke a sense of wonder in even the most cynical of viewers, begging you back to your childhood self for just a couple of short hours. The plot twists are not particularly clever or cunning but if you give Ponyo your full attention, you will be so drawn in that it won’t matter – the story is archetypal and timeless.

An impressive ninety-two per cent “fresh” on Rotten Tomatoes, with reviewers calling it “beguiling and otherworldly”, “beautiful” and  “nature unbound”, Ponyo also reached number nine on the US box office charts on its opening weekend. With the sort of universal appeal that is again comparable to Disney films (and not a lot else), Ponyo is accessible to everyone with a heart. If you are looking for an oscillating thriller, or the deconstruction of the human psyche, then it is probably not the movie for you, but if you’re easygoing and searching for something just that little bit different, then go for it. Beautiful animation (with inked-and-painted cells) just add to the allure, and the story of Ponyo will captivate you. Despite the simpleness I’ve mentioned, I don’t feel that Ponyo falls short in any way – on the contrary, it goes over and above what I have come to expect from children’s movies, or indeed any movie at all. Ponyo is a must for the blu-ray collection.