the changing face of the oscars 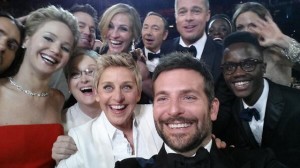 On Monday, the biggest night in Hollywood was telecast across more than 150 countries around the world, live. The night that movie lovers, fashion lovers, celebrity sycophants and dreamers tune in to, to celebrate the very best achievements in cinema, a medium that, in one way or another, shapes us all.

Yesterday, while trying desperately to avoid finding out the results before getting home late and catching the encore, I engaged in many a discussion about the awards and the Academy themselves. I found out that 96% of the Academy are white, 74% are men, and the average age of a member is in their mid 60s. We also discussed how wrong it was to have separate categories for male and female actors, and the new #AskHerMore campaign starting this year, aimed at reducing sexism on the red carpet.

While we felt so glum about the biases that seem to be intrinsic to the Academy Awards, my spirits were lifted and some hope restored as soon as I began to watch the ceremony.

The obvious thing that made for a less discriminative Oscars ceremony this year was the fabulous host, Ellen DeGeneres (who may or may not have taken the best selfie in the history of all time). As opposed to last year’s host, Seth Macfarlane, who wrote and performed a song about all the women in the room who had shown their ‘boobs’ in movies, Ellen spent a great deal of the ceremony honestly complimenting everyone on their incredible achievements in the art of cinema without the air of criticism that’s been part and parcel with these events for decades.

Ellen did make light of a potential bias within the Academy early on saying ‘there are so many possibilities. Possibility number one, 12 Years a Slave wins best picture. Possibility number two, you’re all racists.’ A statement many would agree with, considering some of the Academy’s previous choices that have been debatably more about saving face that about picking the most deserving film.

However, we still have to acknowledge that if the Academy has been somewhat biased or conservative in the past, the very first award of the night proved that a change is happening.  Whilst the Academy may be a bunch of old white guys, they’re opening their minds, as best actor in a supporting role went to Jared Leto for his role as a trans woman suffering from AIDS in Dallas Buyers Club.

The world was also introduced to the new Academy president, Cheryl Boone Isaacs last night. The very first African American to be president in the Academy’s 86 years, and only the 3rd woman.

And whilst the women were still mostly introduced as ‘stunning’ as opposed to men’s ‘talented’, our own home grown heroine, Cate Blanchett took a stand for women in Hollywood in her empowering and beautiful acceptance speech for best actress in a leading role for Woody Allen’s Blue Jasmine.

‘As random and as subjective as this award is,’ she began, her beautiful vocabulary and delivery belying the middle finger she was essentially giving the Academy, ‘It means a great deal in a year of yet again extraordinary performances by women.’

‘(Thank you) to the audiences who went to see (Blue Jasmine), and perhaps those of us in the industry who are still, foolishly clinging to the idea that female films with women at the centre are niche experiences. They are not. Audiences want to see them and in fact, they earn money.’

Her next remark was drowned out by cheers, but before moving on to thank everyone behind the scenes, she shouted out with such integrity: ‘The world is round people!’

But our spectacular Cate didn’t stop there, taking a moment at the end of her speech to nod to her home: ‘There is so much talent in Australia, and Michael Wilkinson, CM (Catherine Martin) and I are just tonight’s tip of the iceberg.’

Overall, whilst the awards in themselves, and the complimentary language of presenters at this year’s Oscars were still carrying an air of sexism, ultimately, the 86th Academy Awards proved to be a step in the right direction for equality in Hollywood.

One thought on “the changing face of the oscars”