tv: catching up on riverdale 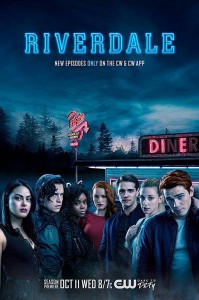 Teen drama-fest Riverdale is well into its second season, yet only now have I finally succumbed to the show that has been clogging all social media with gossip, theories, and fangirling for the past twelve months. I’m a fan of dark dramas, so Riverdale had always intrigued me, but I didn’t know the true extent of this intrigue until I watched it.

The first thing you should know about the show is that it’s a new take on the Archie comics. With exposition delivered in the form of narration by the infamous Jughead Jones (Cole Sprouse), Riverdale kicks off with a murder mystery before diving straight into the high school drama. While the melodramatic goings-on of American high schools may bore many people, I can assure you that the show picks up the pace as it goes along, and the more dramatic touches don’t detract from the overall appeal of the show.

For anyone who may be as oblivious as I was to the Archie comics prior to watch the show, let me fill you in on the characters. Riverdale is a small, yet divided, town that is home to several young, inquisitive individuals who are forced to join together to solve the mystery of Jason Blossom’s (Trevor Stines) death. With the fiercely loyal Archie Andrews (K.J. Apa) at their head, Veronica Lodge (Camila Mendes) and Betty Cooper (Lili Reinhart) tag along – their participation, in part, fuelled by their interest in Archie and Jughead respectively. There are several other characters that make repeat appearances, including a seemingly token gay character, a grieving, bitchy ‘it’ girl, and an all-girl band.

The second season kicks of with a bang as Archie’s father is shot by a mysterious man wearing a black hood. More deaths quickly follow, all of which appear to be linked, and Archie makes it his mission to not only protect his family, but to catch the hooded man before he kills more innocents. Archie and Veronica are going strong as a couple until her father returns from jail and decides to stir things up, while Betty struggles to deal with Jughead’s sudden interest in his Southside Serpent heritage.

As the gang rallies together to save their beloved town, they are faced with many challenges along the way. Not even the brave teenagers of Riverdale can avoid the clutches of heartbreak, and from the very beginning romance features very heavily in the show. From Archie to Jughead, Betty makes the rounds before Veronica joins the fray, bringing her brazen and flirtatious attitude. While I wouldn’t normally be a fan of romance for the sake of romance, in Riverdale it doesn’t seem overly forced. The relationships fit seamlessly in with the story and provide those with a flair for the romantic with exactly what they were looking for.

The two girls that are at the heart of these romances are both strong, confident women. Yet at times, Riverdale demeans their status by stereotyping them as the ‘good girl’ and the ‘bad girl’. From the beginning, Betty is cast as the goody-two-shoes with brains, beauty, and a permanent ponytail on her head. Veronica, on the other hand, is the very definition of a bad girl. She parties, she drinks, and she knows how to make scene. Despite the occasional simplistic representations of gender throughout the show, most of the time Betty and Veronica are very supportive of each other. After their small hiccup at the beginning of the first season, they become best friends and strive to empower each other, refusing to let boys get in the way of their friendship again.

For those who aren’t fans of romance and friendship drama, fear not. Riverdale more than makes up for their soppier moments with the intense focus on the mysteries that structure each season. Straight off the bat, the show reels you in with unanswered questions and a mystery that needs solving. At the beginning, it seems fairly innocent, but as the case drags on, darker secrets are revealed. Secrets that paint Riverdale and its inhabitants in a completely different light. Regardless of all the drama and romantic elements, if it is anything that will draw you into the show it is this. No matter how hard I tried, in the end I couldn’t help but wonder who the murderer was in season one. And that is the magic of Riverdale.

I certainly wouldn’t say that the show is perfect. Just like any popular drama, there are several flaws in Riverdale. The biggest of these, of course, is the fact that the children, who presumably are around the age of seventeen to eighteen, seem to somehow be allowed to go out at all hours of the night without informing their parents, in a town where there is a known killer on the loose. Obviously, it fuels the show and allows them to give an excuse as to why the characters are able to solve the mystery on their own. But in terms of logic, it makes no sense.

If anyone is sceptical about trying Riverdale, I would highly recommend it. It may be a bit too teen angsty at times, but the darker twists more than make up for it. And I’m sure you’ll find that, like me, it’s very easy to get addicted.

Jessica Kennedy is a Melbourne-based writer and uni student. She tweets @_jess_kennedy and blogs here.