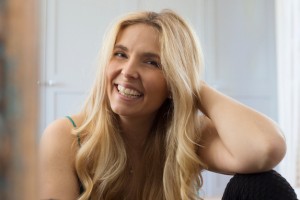 When I sit down to chat with filmmaker Claudia Pickering over the phone, I am immediately struck by her infectious enthusiasm. She’s sitting in a café working on a web series while we talk. I’m sitting at my desk at home, but still get swept up in the excitement of her burgeoning career in film.

Pickering has plenty of reasons to be excited. When we chat, her debut feature film Frisky is about to have its Australian digital and home entertainment release. The film, which has already been distributed in the US and Canada, has also been picked up by Jungle to be turned into a TV series. Pickering recently travelled to the US as part of Screen Australia’s Talent USA trip, where she and other emerging filmmakers undertook masterclasses and networked with people in the industry. There are more feature films in the pipeline, as well as a web series about women in STEM called Resting Pitch Face. It’s almost exhausting to think about, but it’s clear that this young filmmaker is enjoying every minute.

Perhaps that enthusiasm comes from having been unfulfilled by her work in the past. When working as an architect in San Francisco and coming up with filmmaking ideas on the side, she went to see a friend of a friend’s film that had been made on a small budget. It was a lightbulb moment for Pickering, who checked her own funds that night and soon quit her job to make Frisky.

Inspired by the filmmaker’s own experiences, Frisky is about two young female friends who move to San Francisco to advance their careers, but ‘end up chasing tail instead’, as Claudia puts it. ‘I did exactly what they did,’ she explains. ‘I moved to the US trying to take my career in a particular direction and ended up getting swept up in this extremely volatile but passionate, obsessive best friendship.’

The film is billed as an exploration of the period of limbo between university and real life, and for Claudia this was a time where the loss of structure of schooling left a void that was filled with friendships of a kind she hadn’t experienced before.

‘As soon as you’re out there on your own, in the case of Chloe in the film and in my personal case, you just kind of step out there and all the structure that you’ve once known disappears and you’ve got to figure it out,’ says Pickering. ‘That’s what Frisky is, it’s Chloe figuring that out and really blundering her way through it to eventually [give] up what she thinks she wants to find what she needs.’

The film was made on a $5,000 budget, shot guerrilla-style in San Francisco (and was nearly shut down by the cops when neighbours thought it was an adult film). Crew members were sourced from Craigslist. It just so happened that almost all those crew members were female, something rather special in an industry criticised for its lack of female representation.

‘That was the beautiful thing about Frisky, it was all these women banding together to make a huge project together, just to make it happen,’ she says. ‘That’s what we need to do, to just keep making stuff and drown out all of this bullshit that says there’s any kind of lack of audience or intellectual difference between work that men and women make.’

As someone who is quickly becoming a prolific filmmaker, writer and director, Pickering is certainly doing her part. ‘[My work] generally isn’t stuff that pushes too much of agenda, but within itself it’s pushing an agenda,’ she explains. ‘This is work about women, it’s largely for women, and it’s written and created by women. So of course, women are going to like it. I am trying to push my message by creating more work for my demographic.’

Frisky is available now on DVD/Blu-ray or through iTunes, Google, Fetch, Sony Play Station, Bigpond and Xbox. Check out the trailer here: http://www.friskymovie.com/.

Rosie Hunt is Lip’s film editor. She lives in Hobart and tweets at @roseh11.