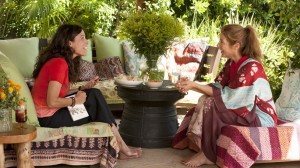 So you’ve managed to make your way to the cinema and you stand in line with your friend trying to make a last minute decision on what you should watch. On offer is the latest addition to the Marvel Universe starring..

Have I lost you?

If you had the opportunity to take advantage of a rare opportunity would you take a rain check on the humdrum option in place of something spectacularly refined and thoughtful? What if it meant supporting underrepresented women in the arts community?

Enough Said starring Julia Louis-Dreyfus, Toni Collette, Catherine Keener, Tavi Gevinson and James Gandolfini is a must see for all the right reasons. Aside from the predominately female cast and despite the sparingly used but highly familiar musical cues, the film offers audiences a window into relationships that doesn’t leaving you somewhere on the scale between groaning in discomfort and profusely agitated.

Nicole Holofcener’s superb skill as a writer and director is the key to this delicate and finely tuned portrayal of human relationships. Finding the balance between depth, humour and empathy makes for one very satisfying addition to the less than satisfying list of films released by women for the year 2013. (I recall earlier in the year Sophia Coppola’s The Bling Ring rarely got a release, playing in just one cinema in Sydney).

The film follows Eva (Julia Louis-Dreyfus) as she tries to navigate her way through her work and social life with as few casualties as possible. The plot isn’t too fantastical nor it it ridiculously heaped in consumer culture. No one gets a demeaning make-over in an attempt to salvage their at risk self-esteem, nor does a shopping spree prove to be the remedy for all life’s ills.

The film is refreshingly not interested in the differences between men and women but rather it’s about people trying to make a relationship work. It also respects the fact that both men and women in relationships will experience similar feelings of insecurity, excitement, relief and frustration. There is no divisive or binary logic reinforced throughout the film in regards to gender relations in contemporary society.

If anything, the film celebrates the universality of both maternal and paternal experience though the struggle shared by the parents in the film. The experience of raising a child that is now leaving your care is something that crosses even the most consistently manufactured gender divide, that is, that women become more attached to their children than men do. Enough Said is measured in its outpouring of emotion, sincere and not without its sense of humour (it may surprise that the film is very funny for the most part).

Sadly, it feels like quite a privilege to have the opportunity to see a film both written and directed by a woman, even more so with the support of a big studio like Fox which also brought us the female-led comedy The Heat starring Sandra Bullock and Melissa McCarthy earlier in the year.

It is also not the film to beat the Bechdel Test at every single turn, but it does prove that women-made films about relationships can avoid being reductive, and can completely satisfy the most hardened feminist filmgoer.

Let’s hope that with our support big studios become more female-friendly and trust audiences to be interested in stories written and directed by women.