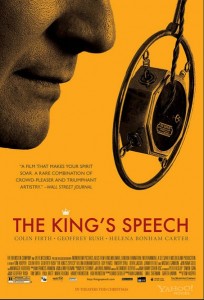 The King’s Speech is a beautifully shot film about power, and the power of words.  It could have been nothing more than a feel-good academy-award wannabe with a predictable plot – but the film is so well made, and the performances so well played, that it rises above being perfectly adequate to become perfect.

Albert, the soon-to-be King George VI of Britain (Colin Firth) – known to his friends as Bertie – is the stuttering, sensible second son of the King George V.  The King dies, and Albert’s brother David – known as King Edward VIII – takes the thrown, but he does not take his responsibilities seriously.  When David abdicates in the name of love, Albert is thrust into one of the most prominent positions in the country – and with Hitler delivering rousing speeches in Germany, Albert wonders how he is supposed to be a voice for the people in Britain, when he cannot speak.  Bertie seeks the help of the unusual Australian speech therapist Lionel Logue (Geoffrey Rush), and the ensuing friendship helps the King find his confidence and ability to command.

It seems that Colin Firth just gets better and better with age (with the notable exception of his starring in The Picture of Dorian Grey, a horrendous abnormality).  His two most recent films, A Single Man, and now The King’s Speech, constitute two of the best performances of his career.  Helena Bonham Carter also turns in a fine performance, though it may come as a surprise to some viewers that she can pull off understated, after having seen her in nothing but Tim Burton-directed films for a while.  Geoffrey Rush is, of course, also fantastic.

The King’s Speech does feature, to be fair, a somewhat predictable plot line.  But what it lacks in originality it makes up for with its cinematography.  The colours of the film are beautiful and muted; and director Tom Hooper uses fish-eye lenses to great effect.  However, the beautiful cinematography certainly isn’t there to compensate for any sort of word defect, as in the protagonist: The King’s Speech has a lovely script.  The best moments are those between Albert and Lionel, displaying their unusual and unique friendship.

One thought on “film review: the king’s speech”