The Flappaganza is the latest and boldest evolution of Tara Dowler and Lou Mapleston’s musical comedy act, Pink Flappy Bits. This sex-positive, feminist comedy showcases a plethora of talented performers in a style that is both daring and charmingly self-deprecating. 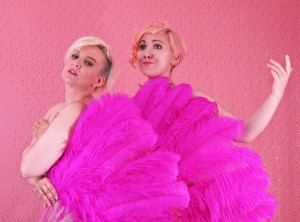 Unlike previous shows by Pink Flappy Bits, The Flappaganza is a collaborative act that features several different cabaret performers on each of the seven nights it occupies the 5:30pm slot at The Butterfly Club. Dowler and Mapleston open and close the show with their own material and act as MCs throughout the evening.

The first number, a song called ‘White Feminist’, allows the hosts to acknowledge the position of privilege from which they speak, with regard to gender politics. When I interviewed Pink Flappy Bits for Lip Magazine last year, they told me this particular song was their way of ‘situating ourselves in the discourse of our art form and being upfront about the fact that we are only speaking from own experiences and a place of some privilege’. The song also immediately showcases the duo’s genuine musical skill, which provides a strong foundation for all their work.

The first guest performer on this night, Wednesday the 5th of April, is Six Inches Uncut. When the self-proclaimed ‘drag punk-poet’ appears on stage wearing stunning makeup and little more than some strategically placed pink duct tape for costume, it is immediately no longer 5:30pm on a Wednesday night. Six Inches Uncut’s performance material is truly exciting and original, though unfortunately performed with some technical difficulties and visible apprehension.

The next performer, Ira Luxuria, is the dramatic highpoint of the evening. Between ‘White Feminist’ and this grunge-rock striptease, I find myself reflecting on the way feminist discourse in art can at certain times be effective when it acknowledges its own convolutions and political obstacles, and at other times (when a woman removes a glitter filled tampon from within herself and propels it into a wide-eyed audience, for instance) be most effective in a lack of restraint or intellectualisation.

Finally, Kimberley Twiner performs a monologue from Shakespeare’s Pericles, delivered with admirable commitment unmoved by the audience’s hesitation. Twiner’s style is unusual. It can be received as simply an absurd comedy act or perhaps a deeply thoughtful interpretation of Shakespeare’s work. Either way, if Twiner’s mission is to use this short spot to create audience intrigue, she is successful.

As for the hosts, Dowler and Mapleston juggle many different performative voices as MCs, stand-up comics and musicians. They are supportive and engaged throughout, although the transition from one role to another and the times spent explaining or creating a segue can be a weakness. The comedic high point is the ‘Your Dick Won’t Finish Me Off’ song, which allows the pair a moment to be in full comedic voice, hilarious in both material and delivery.