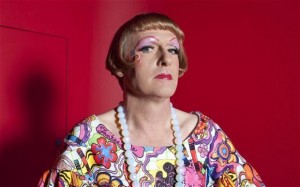 I paid roughly $450 dollars for a one-day trip to be in the same room as my art idol, Grayson Perry, at the media preview of his new show My Pretty Little Art Career, which just opened at the Museum of Contemporary Art in Sydney.

It is testament to the intense yearning that art, at its best, can really speak to, that it can make a person on a tiny income give up so much time and money just to be close to these inanimate objects and their maker. I think often of the gallery and museum as a contemporary pilgrimage site for those who aren’t invested in any organised religion, yet still seek something outside of themselves to enquire about the meaning of life and death, and what it means to even be human. This is made apparent by the boon of biennales, fairs and blockbuster exhibits which lure the eager pilgrim to traverse the globe in order to stand in the presence of objects imbued with a metaphysical power very nearly impossible to explain, even by its greatest champions. And of course there’s the austere gravitas and decadent architectural design intended to dwarf the individual presenting it all, much like traditional places of worship for many organised religions. The inherent power commanded by such institutions is a real spectacle in itself; the subtle, shimmering halo surrounding its most prized possessions almost perceptible to its most dogmatic disciples.

‘The true artist helps the world by revealing mystic truths,’ Bruce Nauman’s glowing neon from 1967 tells us, and Grayson Perry, the ‘trannie potter’ as he calls himself, is a benevolent and humorous channel for truth, and takes the role rather ceremoniously, enshrouding himself in resplendent robes and elaborate gowns, embroidered with wide eyes, dicks wrapped in fat bows and golden, teddy bear crotch adornments. His works deals in revelations and critiques on the human condition that beam across ceramics, sculpture, tapestry, collage and printmaking. In the past few years, Perry has also courted celebrity outside the art world, through multiple television series’ and the highly esteemed Reith Lectures.

It is no accident, however, that Perry works predominantly with clay, that most sacredly ancient and fundamental of materials and speaks proudly of his direct replications of historical ‘pots’- that is to say, he sees an old pot he likes the look of, and copies its form and shape before applying his own decoration to it. This is a clever device, as Perry’s pots are thus instantly recognisable as important objects even to art history and antiquity noobs, through their form’s referencing of the ancient artefacts already imbued with the mystique and importance of the ages.

This however, is not surprising, as Perry takes an openly tactical position as an artist, the way one might plot their movements when knowingly crossing enemy lines. He comes out with such delightful advice as ‘I sometimes joke if you want to sell art to collectors then do beige; beige black and white’ and I’ve heard him say (though I can’t remember where) that if you want to make lots of money use gold in your work.  Moving through the galleries of pearlescent, lustrously gleaming pots in the exhibition, one considers how much of this is a joke, and how much truth.

This cheeky ambiguity of Perry is the crux of my love for his work, as he never really gives you the full picture, but merely hints at potential truths. As a social commentator he rarely proselytises, despite working with the themes that many of us struggle not to press our subjective judgements up against: sexuality, violence, wealth, ownership, class, taste, culture, religion.

In his 2012 documentary series for Channel 4, All In The Best Possible Taste, Perry seeks to interrogate the interests and tastes of the lower, middle and upper classes as fodder for his newest tapestry series. The resulting works are breathtakingly intricate and brightly coloured, filled with the symbolic resonance of product placement and dramatic, White characters clutching anxiously onto their brand name goods. A moon-faced and vaguely threatening Jamie Oliver leers from atop The Vanity of Small Differences (2012) like a gargoyle, much akin to Woody Allen’s screeching mother in the New York skyline of Oedipus Wrecks (1989). Perry here and elsewhere, illuminates the celebrities and brands who dominate the global marketplace through the manipulation of all of our most basic human desire to belong. ‘Good taste,’ he tells us, ‘is that which does not alienate your peers…it’s like a tribal bonding system.’

Taste has always been a central concern in Perry’s 20+ year practise, as he mixes high and low brow cultural references on his multi-layered and laboriously constructed pots. Victorian decorative motifs, floral insignias and Breughel-esque scenes of nature smash into cut-outs of Cookie Mueller in a wedding dress alongside an image from her disturbing sex scene in the 1972 John Water’s cult classic, Pink Flamingos, to portraits of transvestites, fast cars and bomber planes, porn and violent, deadbeat fathers. Perry describes himself as from ‘a world which welcomes people with low impulse control,’ and his pots symbolically recreate the real world clash between the often repressive nature of the White Western status quo’s generic Christocentric agenda, and those who won’t or can’t fit into it.

Perry’s experience growing up in working class Essex before transmogrifying to the echelons of the middle class elite puts him in a prime position to enunciate both the nuanced and the glaring differences in these lifestyles and their accompanying outlooks on the world. In particular, a highlight of the exhibition are the four large scale etched print works, A Map of Days, (2013), Map of Nowhere (Blue), (2008), Print For A Politician (violet), (2005) and Map of an Englishman (2004) depicting intricate snippets of text juxtaposing cultural, philosophical and emotional beliefs amidst fantastical battle scenes, a vivisected body (featuring Perry’s own head), maps of city streets and fictional landscapes flanked by tiny tanks, twirling smoke and gunmen. These works read as the psycho-geography of an individual who seems to carefully weigh up the polarities of the world and lays them out like a deck of cards. They give one the feeling -thought not in any defeatist sense- that one must simply play the hand they were dealt as it lays, because it is all a game of chance.

I enjoyed the exhibition, but then I knew I would, as I’ve been devouring materials about Perry and his work for a number of years. Funnily enough, waiting in the departure lounge after my pilgrimage, I was thinking about all this and as I went to board the plane, the Jetstar flight attendant at the gate stopped me. I was then informed that I had to ‘remove or cover my shirt’ because she found it ‘offensive’ or I would not be permitted to board the plane.

Apparently my t-shirt -a treasured souvenir from the Mike Kelley retrospective in 2014, which reads Pants Shitter And Proud: P.S. Jerk Off Too– had the potential to disrupt other passengers in such an intolerable fashion that I could not possibly be allowed to fly while wearing it (never mind how exactly they would even see it to be so horribly offended, given the 20cm of breathing space between your nose and the seat in front of you when flying economy). I angrily stewed in my seat the whole way home, as I bitterly considered the sore difference between the values of my particular self-imposed Church and its accompanying belief system- where self-expression is champion and opportunities for social and cultural critique are of paramount concern- juxtaposed with the conservative climate of warped moralising and nanny-state censorship in the name of ‘taste’ that I experience daily, living in contemporary Australia. I’ve no doubt many would call this ‘petty’ and tell me ‘I should have better things to do,’ or say ‘its just a shirt, get over it,’ but these every day, corporate hand holding gestures where what we define as culturally acceptable is defined by faceless businesses is exactly what I see Perry’s life’s work trying to shift.

The work reflects importantly on the subjectivity of what is and isn’t offensive, and the rights any individuals, religions, corporations, and governments should have to police, control or dictate the behaviour and appearance of anyone else around them.

I hope that flight attendant heads to Grayson Perry’s My Pretty Little Art Career this summer, and upon leaving finds that her views on what is and isn’t tolerable to publicly bear witness to a lot more conflicted than when she entered.

Meanwhile, I’ll keep going to my own Church and praying for a miracle.