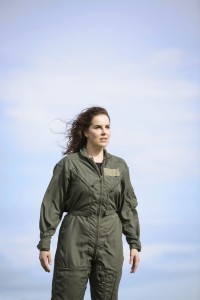 From 11 June- 12 July this year, the Red Stitch Actors Theatre will present the Australian premiere of Grounded, an internationally acclaimed play written by George Brant and directed by Kirsten von Bibra. Grounded is a solo-drama that tells the story of an F16 fighter pilot, played by Kate Cole.  A  rock star of the great big blue above, she suddenly finds herself pregnant. Her career in the sky is over- she now flies drones from an air-conditioned trailer in Las Vegas. Described by Red Stitch as “visceral” and “gripping”, the production documents one woman’s internal struggles and external battles.

Lip’s Sophie Lamond spoke to Kate about the production:

Tell me about your experience so far with the play.

It’s massive. The scope of the storytelling, how the language is structured, its enormous.

[It’s] an amazing piece of writing, very poetical, lyrical, economical. It has these one-word lines, run on lines and manages to be about everything: war and motherhood, death and life. How to carry out the carnage of war. It’s one of the most brilliantly written plays I’ve ever read.

How did Red Stitch come to producing Grounded?

The company read the play. It’s one of the hottest plays in the world. There’s been productions everywhere. The Guardian named it one of the best plays of 2013. It is extraordinary, they just jumped on it. And I was lucky enough to get the part. There’s a lot of levity and joy in the character. She’s fiercely intelligent, funny and sassy. I’m really glad to be a part of it.

Is this is a different kind of role for you? Have you dealt with the sort of militaristic aspect before?

Actually this is the third military play I’ve done. I don’t keep seeking them out, it just keeps happening. They’re all different, they all infiltrate your life in weird ways. Just reading about warfare and the NSA. Especially this kind of modern warfare.

I’ve learnt a lot about the different mechanics of the military. Talking about Unmanned aerial vehicles (UAVs) and Unmanned Combat Aerial Vehicles (UCAVs) Things like The Reaper – which is the most weaponised drones – and The Predator. The vernacular of the military is epic.

What’s been particularly interesting about this role?

Looking at the distance between the killer and the killed, the detachment and whether that makes it easier to kill. Before this character was flying jets, she was in control and now she goes off to work in this trailer in the desert and its like a video game. She monitors people’s lives on camera. Almost gets to know them. And then she pushes a button and it’s done.

The character is grounded from her fighter pilot duties because she becomes a mother. How does this play deal with the conflict between being a soldier and a mother?

She’s in a tiny room working 12 hours a day, 7 days a week. And then she’s not got the separation of being out on a tour of duty, she goes home and has to engage with her child and husband. And she doesn’t work with other people. It is solitary. Cloistered. And her security clearance forbids her to talk to anyone. There’s no relief. The playwright has described it as ‘the worst case scenario for the question of whether it is possible to be in two different people at once – for those trying to have it all’

This is about her reaction to these extremes. She loses her identity and is repurposed – it is a moral injury on this particular woman about carrying out this particular kind of warfare and how does she compute that against her own life.

This is an American play, about a particularly American scenario. How do you think it will translate to Australian audiences?

Even though it is an American story it has relevance to Australia. Drone warfare is only going up and up and up, everywhere. Australia uses them; everyone is lining up to get this technology. People are intensely curious about it.

And it isn’t agitprop.  There is a great moral complexity in it all. And this is about personalising that and focusing on the people involved. It’s a universal story.

Red Stitch Actors Theatre will be presenting Grounded from the 11 June to the 12th of July. Lip will be reviewing the production so be sure to check back to see what we think!