She is the sensational Diva of Afghanistan and the only female artist/activist of Afghanistan with over 300,000 fans on Facebook. A multiple award winning artist, Aryana Sayeed is one of the rare singers that only performs live in her concerts. Her outstanding performances, her fight for women’s rights, and her beauty have won millions of hearts, both inside Afghanistan and internationally. She is a young, successful woman who has made many accomplishments in her short career, including appearances on Al-Jazeera, MTV World, BBC World and many more. Her advocacy for women’s rights enabled her to appear on BBC World discussing the challenges faced by her and by other Afghan women.

Lip writer Wida Tausif chatted with Sayeed about her music career, what life is like for women in Afghanistan right now, and what a humble pop star hopes to do about it. 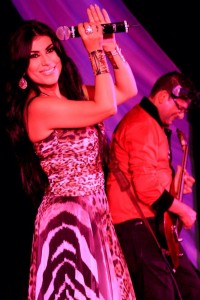 LIP: Tell us about your journey – when did you begin to pursue a career in music, and how did it happen?

ARYANA SAYEED: My interest in music developed at a very early age when I used to perform for myself in front of the mirror, pretending that my mom’s hair brush was my microphone. Afterwards, during my high school years, I was a member of the school choir and was very much interested in pursuing a career in music, however my family insisted upon me focusing on my education instead. It was much later after my graduation when I started pursuing music again and started performing at some events. It wasn’t until approximately five years ago when I officially decided to leave everything else aside and pursue a full time career in music.

AY: Unfortunately, an ongoing trend within the Afghan music industry has been “playback” performances, where many artists simply play their recorded songs/CDs in their concerts and lip-synch or at times sing on top of the already recorded songs. One of the main reasons for this trend is the fact that due to the lack of proper progress within Afghanistan’s music industry, there are a few artists who have achieved fame within the Afghan community simply because they have recorded a decent song inside a studio and put together an eye-catching video for it; however they lack the ability to perform the same songs live at a level that would be even remotely close to the studio recording. I personally do not support this trend as I believe, despite the flaws of a live performance, an artist’s true artistic ability is displayed when they perform live. There are many artists with true talent who never get recognised because the slots within the Afghan music industry that should be filled by them are already occupied with those who are getting away by hiding behind playback performances. I hope to see that trend change as soon as possible and on my part at least, I always perform live in my concerts.

L: Your song “Banoo Atash Nesheen” meaning “The Lady of the Land Fire” gained a lot of recognition, both within Afghanistan and internationally. Was this something you expected?

AY: If I am totally honest, even before the song/video for “Baanoo-e Aatash Nesheen” was released, both my management and I were counting a lot on that song/video. The lyrics for the song are extremely powerful, the music is world-class and the video we put together for it portrays the realities of the challenges and hardships faced by Afghan women on a daily basis. The fact that it was the first ever Afghan music video to be featured on MTV’s Rebel Music Series and it even got featured on BBC World’s Impact along with an appearance by myself as a first ever Afghan artist (male or female) to appear on that show were results that pleasantly surprised us. All that being said, for me personally the fact that it raised a bit of awareness of the ongoing issues and challenges faced by Afghan women meant much more than any other recognition myself or the song/video obtained.

L: Do you have any current projects?

AY: I indeed have many ongoing projects that I am working on; including another very powerful song dedicated to Afghan women again (titled “Qahramaan” or “Champion”) that probably will be released before this interview is published. I am also working on my first ever Pashto, Hazaragi and Qarsak (Panjshir) songs and a couple of other music videos that I will be recording very soon.

L: What are your musical goals?

AY: My musical goals are very simple; (i) To bring a positive change in the lives of Afghan women before it is time for me to say goodbye to this world, (ii) to open additional doors for upcoming Afghan female artists with talent to flourish within the Afghan music industry, (iii) to produce enough powerful and memorable songs so I could be remembered as an accomplished artist of Afghanistan and lastly (iv) to be remembered as the Greatest Artist Afghanistan has ever had… j/k about the last point, or maybe not!

L: What does today’s women’s rights movement in Afghanistan look like?

AY: Unfortunately when it comes to women’s rights in Afghanistan, there is always lots of “talking” and we barely see any action to bring forth a positive change in their lives and to provide them with basic human rights. I also find it a bit disturbing when I see majority of focus being on how so many years ago Afghan women used to be able to wear mini-skirts and today they are covered under burqas, since the challenges Afghan women face on a regular basis go far beyond not being able to wear mini-skirts. They constantly deal with street harassment when they step out of their house, they are physically abused by their husband or other members of the family and it is considered a normal practice, and of course recently there have been many reports of Afghan Women getting raped mercilessly. So my hope is that the new government with the leadership of Mr. Ashraf Ghani and Mr. Abdullah Abdullah will dedicate a major part of their focus on improving the lives of Afghan women.

AY: Well to be quite honest with you, the one and only item those who are against progress [for the] Women in Afghanistan can pick on is the style of my clothing or my dresses – there are not any other points that they could prove as negative. It is not that I wear revealing or short dresses, however in the past there have been major controversies over my performance dresses being a bit too tight and body-hugging. I like being myself and do not want to change for anyone; especially when I know those who try to change you are oppressors who simply want to control anything and everything a woman is involved with within the society.

L: Due to your involvement with the women’s rights movement and your performances on stage without your veil, you have been subjugated to a lot of repression and threats. Will you still be travelling to Afghanistan?

AY: I have already faced numerous threats to the point that one particular TV channel inside Afghanistan actually issued a death warrant for me; advising the viewers “anyone who cuts of Aryana Sayeed’s head from her body would go to Heaven.” I have still continued to go back to Afghanistan and to stand up for what I believe in. If I allow them to succeed in their goals of oppressing me or forcing me to give up, that would mean that I failed in my goal and they succeeded in theirs. I think the oppressors in Afghanistan finally have to realise that they cannot enforce their way of life on everyone out there. As long as the normal boundaries of humanity are maintained, every human being should have the right to live their life according to their own wishes and not be dictated by someone else in regards to what she can or cannot do.