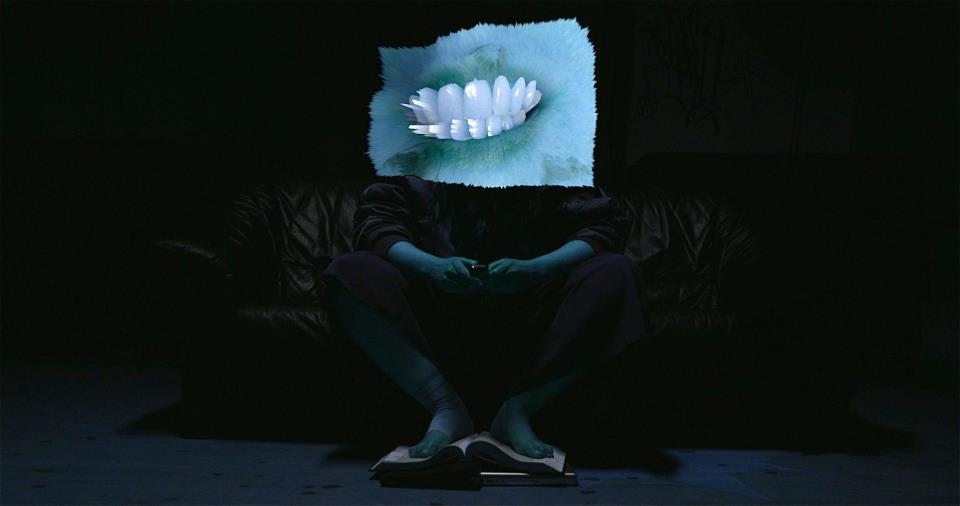 Janine Rostron is a bit of a personal hero of mine- I’m just going to chuck that disclaimer out right from the start. Go and watch her latest single Misxgyny Drxp Dead under the moniker Planningtorock and you’ll know exactly where my kiddish adoration springs from.
Her commitment to pushing boundaries in sound, video and performance is constantly astonishing, as is her ability to make the future seem like it might just be okay – if you’ve been struggling to find anything that sounds new, or that holds substance in the face of so much stuff that seems to stand for nothing, then it’s my pleasure to introduce you two.

I asked her some questions this week, prior to the launch of the new album, also titled Misogyny Drop Dead, out now.

With my own work I often feel an internal pressure to censor myself as I have a deep fear of alienating others. Is this fear something that affects you or your work? What is the difference to you to make work that could be more easily accessible, potentially reaching a bigger audience, and being innovative/subversive, perhaps drawing in those who have felt ostracised from the mainstream?

If I’m working on something and get excited and obsessed with it then I know it’s interesting (to me) and that gives me the courage and motivation to push it out into the public sphere. I never think in terms of accessibility but I do hope people find their own personal way into the music – if I contemplated what people think of my music  I’d get really confused and probably stop.

Is the creative process one of elimination or more of layering/building up slowly? You’ve mentioned before that you spend a lot of time with each track. There is a big conceptual difference between the act of adding to versus the act of subtracting from something. Is that something which influences how you work?

Actually, it’s kind of both elimination and layering/building –  putting in, taking out, editing, re-writing.

Your persona comes across as anti-gender much more than an exploration of trans-gender exploration- I see it less as a comment on queer culture, more as some sort of Futurism. How do you see the audience relating to this sense of play or character fluidity?

It’s more like “anti stereotypes in gender” in terms of appearance . I’m interested in people who identify themselves as women and want to expand and explore within that look.

In this sense your work seems to me to be about ‘anti-shock.’ It feels more like an invitation to explore our own personal limitations, together as people. What do you think limits people most in exploring this sense of play in their own lives? Do you see your work as being a part of bringing that out in the audience?

Gender identity should be a playful and flexible experience – a personally customized journey without  limits. Capitalism and social conditioning are constantly trying to reduce gender identity into a commodity to make money and this has a damaging and reductive effect on gender identity.

Humour is something that came up a lot in past interviews, which really strikes me about your work- it almost absurdist, or Dada. Are you influenced at all by comedy, or interested in pushing boundaries in the way playfulness can be used to elucidate truths?

Humour is genius when it comes to dealing with difficult topics and challenging ideas . I watched a lot of stand-up comedy  and kind of wish I could be a stand-up comedian.

Has the effect of feeling displaced in Berlin with the last album altered with the new one now that you’ve been there for a while? How much does the space you’re physically in extend in to the auditory space of the sound?

I have a nice studio here in Berlin with two other close friends of mine and our working environment is very cosy and positive .  And yeah, I would say that  it affects my music in that it creates a strong comfort zone in which to be extreme.

How does being in the public eye as a performative ‘character’ affect your view of yourself in your personal life? If Planningtorock is a by-product of you, what motivates the performative aspect?

Performing is great from the perspective that you spend months and months working alone in the studio on a album  and then you get to share all this music you’ve made with strangers who give you a lot of love. I do like performing but there is always something a bit weird about it on a personal level.

Do you feel your own life has become a generative experience to help others reach beyond the supposed limitations of their gender? You go out of your way to place the new video in 2013 right from the beginning. Do you feel the new album is pertinent to this time, or somehow necessary right now?

To be honest, this record is really necessary for me right now! I have a lot of questions and ideas about gender politics.

In a utopian vision of the future, how do you see people relating to each other through our bodies and our actions?

Perpetual trans – liquid opinions. Flexible minds and progressive actions.
If misogyny really was dead, what might that look like?