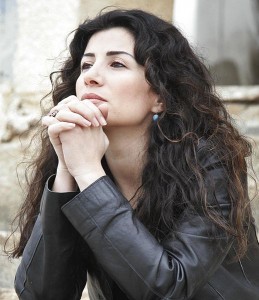 Joumana Haddad is a truly a remarkable woman. Born in Beirut in 1970, she speaks and writes in several different languages, is an advocate for women’s rights, is studying for her doctorate on the Marquis de Sade and also teaches Italian at the Lebanese-American University in Beirut. I was so inspired after I read and reviewed her book Superman is an Arab late last year and I was lucky enough to have the chance to ask her a few questions about her book, the many languages she speaks, and women’s rights.

In Superman is an Arab, you write that your aim in writing this book was not to try to change the world, you were simply writing about what you wanted to write about and utilising your right to do that. Despite this, do you feel you have a responsibility to write about women’s rights?

I do. And when I said that I do not aim to change the world, and was merely exercising my right to express myself, I meant that we all need to participate in the change in order for it to occur. One person cannot be the representative of a group, nor the sole person responsible for a positive transformation. Each one of us has the right, and the duty, to express himself/herself freely, and by doing so, they can bring progress on the collective level. I believe in the individual.

Do you think every writer has the responsibility to write to inform people or challenge their readers’ perspectives on different issues?

It is more a result than a responsibility. The writer’s responsibility is to be true to himself/herself, to his thoughts, desires, and view of the world. When they do that, readers will eventually get to the point of questioning their preconceived beliefs and ideas. To question oneself is one of the healthiest exercises given to the human being. It is the root of all evolution.

You have been accused of having a “Westernised” view of women’s rights in the Arab world and that you’ve been brainwashed by the way the Western world thinks. How do you respond to these accusations?

I believe it is quite offensive to label the defence of human rights as the result of a Western influence. Human rights are universal. There is no Arab dignity versus Western dignity; no Arab freedom versus Western freedom… So I think that Arabs are mainly insulting themselves and their culture when they say that fighting for freedom of choice and women’s rights and self-respect is a Western value. It is also obvious proof of being in denial.

Although you rightfully argue that it is not only Islam, but also Christianity and Judaism, that have long histories of mistreatment of women, why do you think it is that, in modern times, it is in Islam where little appears to have changed?

Islam is more resistant to reform and change because the Quran is believed to be the verbatim word of God. But I do believe that all monotheist religions are inherently misogynist and against gender equality. The means are different but the consequence is the same.

How did you find the process of writing Superman is an Arab?

Enlightening to say the least. But also quite challenging. I had to always be aware of the silent censor inside of me, the one who kept telling me: Don’t say this; avoid talking about that; use this word instead of that word; don’t be so blunt, etc.

You’re not afraid to write exactly what you think, but are there areas wherein you do self-censor, for fear the book won’t be published if you write certain things?

No. I refuse to impose limits on myself while I am writing. It would make me lose what provokes me to write in the first place: that is, embarking on a marvellous adventure where I get to push my boundaries and discover more about myself and the world I am living in.

It does to a certain extent. But it actually works the other way around. It is the subject that chooses the language in a way. There are certain topics which I prefer to tackle in Arabic, others in English, French or Italian… But I am not the one to decide: the idea comes carrying its own favourite language with it. So all I do really is ‘surrender’…

Australian writer Randa Abdel-Fattah wrote a fictional YA novel called Does my Head Look Big in This about a 16-year old Australian Muslim girl, Amal, who attends a private school in Melbourne and makes the decision to start wearing the Hijab. Amal makes this decision because she wants to; she wants to feel closer to her religion and her God. If it is the woman’s choice to cover-up in this way, does that change your opinion that no woman should do so?

No it doesn’t. Because the Hijab is to me a sign of discrimination: Anything imposed on me and expected of me as a female, that is not imposed on or expected from my counter male, is outright discrimination. Women who say they deliberately choose to wear the veil need to ask themselves the following questions: Why me? What’s wrong or sinful about my hair? Why do I need to cover up in order to protect myself, or the man from my temptation? Why is the man considered an animal that cannot control his instincts? Why should I be paying the price of not being treated as a decent human being, but as an alluring piece of flesh? etc

Do you feel like the attitude towards women in the Arab world is changing?

Not yet, unfortunately. We still have a long way to go.

What role does the Western world have to play in this change in attitude? Or is this a fight the Arab world must embark upon on their own?

I am strongly convinced that change and battles cannot be imported, and the Arab women need to fight for themselves, even if it takes longer than we wish. But the Western world can represent a positive model, especially those countries where women have gone a long way in achieving true equality with men.