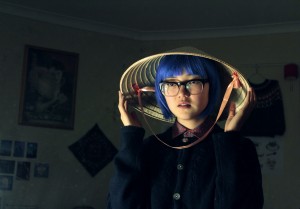 There’s a scene in The Mighty Boosh where Vince and Howard dress as futuristic sailors, and sing about combining elements from the past and the future together, to ‘make something not quite as good as either’. It could be said that Sydney’s ethereal songbird, Rainbow Chan does the same thing, but to a much more positive effect.

Chan is making a name for herself with her dreamy, introspective pop, which combines classical and folk elements with electronic sounds that are decidedly more ‘now’. Chan cites ‘memories and nostalgia’ as centerpieces of her work, with ‘connections between old family members and time’ fascinating her, even sampling the sound of her grandmother laughing on one track. When speaking further on this, Chan says she has a really big fear of death, which ties in to her music. ‘I still can’t come to terms with time passing’, she explains. ‘For me, the whole idea of sampling things and the physical act of making music comes from this idea of trying to capture a moment in time, so that when everything dies there will be something there to document it’. The idea of everyone dying one day is a bit of a bleak one, but Chan can see the beauty in this sentiment. ‘It propels people to achieve more with the time you’ve got. If a person has a passion, realising they’ve got limited time on earth makes them do something with it.’

Chan’s musical influences are varied. ‘I guess my inspiration comes from different places’, she tells me. ‘Recently, I’ve been watching a lot of Japanese TV dramas. They have fantastic soundtracks full of Japanese R&B fusions, which are a little bit wonky, but really sweet and sugary. That’s definitely influenced my music. I also really like folky, Chinese music, because my parents listened to a lot of that when we were young. I’m classically trained in saxophone and piano, so it’s just a big collection of influences coming together.’

The past couple of years have seen Chan’s music become more experimental and electronic. She’s always been interested in electronic music, but didn’t always have the tools. ‘As soon as I got a loop peddle and a laptop, a lot of the ideas I had in my head started to become real.’ She notes how accessible it is to become a bedroom producer these days, saying that ‘it’s so attractive, because you can really take your time, without the pressure of being in the studio and wasting other people’s time. It’s so intimate’. Studying a digital music class at university has obviously given Chan a helping hand, with her intricate understanding of sound evident as she speaks. She talks of ‘looking at music not in a traditional way, but in terms of colour and timbre’. She says she’s ‘obsessed’ with an actual sound being the focus, and the ability to play with it and stretch it, and believes electronic music gives an artist room to do this.

This weekend, Chan will play the second installment of Sydney’s boutique electronic music festival, OutsideIn. Her lush and layered tracks seem the perfect fit for the chilled out festival, where good vibes reign supreme. She tells me that she’ll be performing twice at the festival, a solo set and as part of Astral People’s Since I Left You. A harp, a loop peddle and a violin will feature in her solo set, while the Astral People piece will come off months of rehearsals. The latter is made up of artists from Astral People’s eclectic roster, coming together to reinterpret and re-imagine The Avalanche’s Since I Left You. Speaking about it, Chan tells me that she’s proud of what they’ve achieved. ‘We’ve built connections with each other and it’s been extremely supportive and nice. We’ve worked really hard for it and it’ll be a total party’.