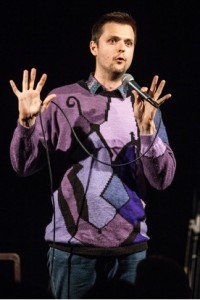 Chris Endrey is an involved artist of various worlds, all of which hope to engage people in their lives and society. Alongside Meg O’Connell he produced and hosted cult variety show In Canberra Tonight. As a musician he performs in various guises, notably with sex-pop band, Fun Machine. His writing has appeared in Crikey, Daily Life, the RiotACT and the Canberra Times and his stand-up comedy debut, The World’s a Playground recently toured to sell-out crowds across Australia.

The World’s a Playground points its finger at the audience and asks them to investigate the hypocrisy present in their lives that they may not even realise was there. Political and culturally relevant, Chris aims his sights at systems and structures that are detrimental to all of us, while reminding us of the parts we play within them. He covers a range of topics, from our social media engagement in the face of crisis and the stupidity of The Melbourne Cup, to the ridiculousness of the paleo diet and the absurdity of anti-immunisation.

Chris’s self-deprecation endears him, and he forthrightly admits to the position of privilege he’s in. It’s clear that he doesn’t see himself as being above it all, insisting that just because he’s on a stage, or that he’s an artist, doesn’t mean we should be listening to him more than anyone else. He freely admits to having issues with authority, regaling us with the tale about the time he met Kevin Rudd and spent the whole night subtly taking jabs at him.

His way of grabbing the audience’s attention with a topic designed to get a rise, and then taking it somewhere entirely unexpected, shines a light on our own potentially knee jerk reactions to emotionally heightened topics. His most confronting joke, about hating refugees, turns into a biting contempt for Australia’s racist culture. It’s a brave move, but one that I think ultimately pays off.

I thoroughly enjoyed Chris’s final performance of The World’s a Playground, and look forward eagerly to his return to Canberra next year and hopefully continued foray in stand-up comedy.

I sat down with Chris for an interview to ask him more questions about his routine, and how his values impact his views and approach to comedy. 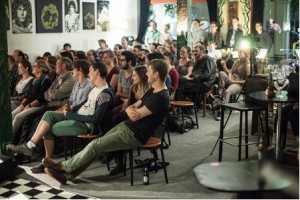 What made you decided to do stand-up?

I’d thought about it for years … I’d sort of avoided it because I was a bit suspicious. I still am in many ways, because it can seem like the main purpose of stand-up is to make people laugh, but I don’t think that’s actually it. I’m glad I came to it a bit older – I’m 30 now – because I’m very clear about what I want to get out of it. I think that comedians in it trying to be as funny as possible risk it becoming a recipe for sadness – because you’re not always going to be on a stage, or maybe your material isn’t being well received, or whatever it might be. But I’m at a point where I really enjoy being able to call out hypocrisies and hold people accountable in ways that are playful; getting to share some ideas. That way, no matter how a show goes, I still enjoy what I’m doing.

What inspired this show, and what was important to you when you were creating it?

I’d say the same stuff that’s important to me in life. Trying to navigate decisions about how we all spend our time that are often outsourced without realising it; and how different ways of living can be impactful in ways we don’t always like to think about. I’m really interested in that stuff, so exploring it in a funny way is really rewarding for me. I’m at a sort of weird juncture where I don’t really know what I’m doing, you know? I quit my job three years ago to pursue artistic games, and it’s been really enjoyable but really hard at times because it’s an outsider position to take. When you’re an outsider looking in, pretty much everything looks like madness. It’s certainly fun to come down and share reflections from that vantage, and hopefully in a compelling way.

It’s one of the only forums where you can really point out how stupid people are and they’ll thank you and enjoy it. 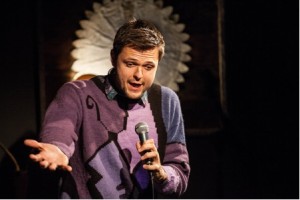 How much do feminist values influence the kind of work that you do?

It’s a difficult question because I don’t consciously sit down and list the values and opinions that I hold in the stuff that I do; but it’s clearly in there. Feminism is a very obvious source of ideas and friction for any commentator – especially comedians – because the gender oppression upon us all is surely going to be seen as one of the dominant madnesses of our time. With any horrible power imbalances, there’s a lot of funny stuff that emerges in the unquestioned views that people have. Anyone shining a bit of a light through any critical lens is inevitably going to be touching upon feminist issues.

I noticed you don’t resort to any sexist jokes in your show.

In fact, that’s one thing that’s been really difficult for me as a punter. There’s a conventional comedy path out there to follow – do five minute bits at comedy nights, open for bigger acts, blah blah blah. I just moved to Brisbane and went to maybe four different open mic nights to get a feel for the scene, and just ended up leaving them all early, sick of hearing the same rape culture/domestic violence gags. It was the same with RAW comedy here; I started dishing out boos from the audience, because I feel like you’ve got to hold people accountable. I guess men belittling women’s power can be an ‘easy target’; it’s maybe safe to go up there and kick people who are already kicked, but it’s not worthy and it’s not achieving anything, and obviously it’s vile and just reinforces horrible systems. It’s not the norm for comedians to be any more sexist than the general population; but that’s not a particularly high bar either.

You have to be very self-critical to dissolve these lenses that are inherited upon all of us, and that’s why it can be fun to point and laugh at them.

I’d like to say that there’s no difference but I guess it’s the same spread of approaches carried over from anywhere else in society. There are different things that are harder or easier for men and women to talk about.

The main trend is the obvious one: that there are way more men doing it. That’s the fundamental point to make. It’s easier for men to feel like they’re allowed to be on a stage and in a public forum delivering opinions. I mean, my whole game is pointing out hypocrisy, so it’s sickening to see progressive comedy scenes that will have a lineup of all men. Because I program my own shows, I take the opportunity to share the stage with under-represented voices. Ultimately, it’s just more interesting to hear a variety of perspectives of the world.

The interesting thing is that the divide has nothing to do with what comedy is itself; it’s just another theatre of gender expectations. The divide’s exposed in this format because you need to feel safe and confident to do it. You need to feel like you’re allowed to deliver opinions and feel comfortable being judged in a certain way… that this results with mostly men is a symptom of society, not the craft. 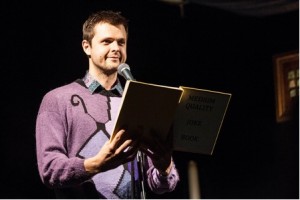 Do you think there’s anything you can’t joke about?

I really feel that there’s nothing you can’t joke about, you’ve just got to be conscious that however you do it exposes what you actually think about something. People can react to threatening ideas and not like you as a result which is fine, not everyone likes everybody. I think that I’m comfortable getting up and making jokes about ISIS and refugees because I know that in all honesty my actual position upon those matters is very compassionate and any cruel words come across as flippant or parody as a result. If your friends joke about a taboo topic, you can immediately tell in the way that they do it if it’s unacceptable to you. Two people can say exactly the same words and you can gauge an entirely different level of harmfulness from the perceived intention. But I think to be afraid of talking about a topic is the anti-comedy really, because the whole thing is an opportunity to talk about anything and let people look at and hopefully shed some of their fears. I think you have to give some of who you are and have compassion to be good at the joke.

A great way to disarm people’s initial hesitance and fear is with comedy.