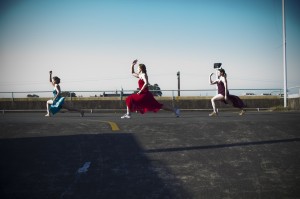 Every year the Crack Theatre Festival, part of This Is Not Art, showcases contemporary performance from artists all over Australia. Taking place in Newcastle, the festival is free to attend and is a four-day long event especially suited to performances that are unique and new and often arising from up-and-coming performance artists.

This year marks year number two for co-artistic directors Finn O’Branagáin and Hannah Strout. The pair are experienced performance makers and arts facilitators who have backgrounds in playwriting (O’Branagáin) and social work (Strout). I got the chance to chat with Strout about how she got started with the Crack Theatre Festival, about the trials and tribulations of putting together a festival that’s both alternative but also seeks to be universal, and about what we can expect at this year’s festival.

How did you get involved with Crack Theatre Festival?

I first went to Crack Theatre Festival in 2013 .. and I knew the artistic director so I went and said Hi and said you know what, this is something I really wanna do. I applied to be an Associate Producer … but was offered the role as co-artistic director.

Why have you come on as co-artistic director again this year?

Finn and I just worked really, really well together, we had a really great time being co-artistic directors together last year. This year we had some of our producers say they were not necessarily interested in being artistic directors this year so we decided to give it a go again.

We also worked really hard to write a grant application for NSW this year … and we were successful in getting that grant which has funded the festival for this year. We worked really, really hard, I’m so glad that we got it. We wanted to see it through.

The money has allowed us to pay for things like marketing, production, but it also pays Finn and myself. In the past there hasn’t been an official wage attached to the position … so to actually be paid for all the time that we’re putting in, really validates us as artists, rather than volunteers.

What is the process of finding artists all over Australia to come perform at the festival?

We do a call out at the beginning of the year for applications, around March, and it’s open to anyone in australia with a new work, a work that they want to tour or a random idea that they want to try. It’s pretty open to anyone working in any sort of contemporary performance. We are able to fund one work from each state and territory to come to the festival. Those are ones who are people in regional areas, or people who are doing something quite interesting and risky and so are probably not going to get many performance opportunities otherwise. We usually have a total of around 30 performances.

People meet two days before the festival starts, so you apply, you do your work remotely, and then you drop into the space you’ve been given.

It’s not necessarily about performing in a fancy decked out theatre, it’s about any space can be a performance space, the interesting thing is the performance itself and of taking away that pressure of a formal theatre space. If you are doing something new and risky, then it will fit somewhere [at Crack Theatre Festival].

We have one main venue, the ‘Crackhouse,’ then we find venues and other places around Newcastle that are suitable performance areas. We’ve performed at the Newcastle bar, a pub called the Edwards in their garage/parking lot space, and we’ve had walking tours. We really try to work to I guess what the work needs.

What is it like to see Newcastle transform during this huge arts event?

This shows you what a city can really offer, when a city has vibrancy, when people are bringing all of this excitement to it. There are also an amazing array of Newcastle artists who participate in the festival so it’s really exciting for Newcastle as well , all of the newcastle artists who are doing their own thing and maybe feel like they’re in isolation get to meet artists from Melbourne, and Perth so I think that’s really exciting for newcastle.

What’s on this year that you’re really looking forward to showcasing?

There are a few interesting things happening this year. We have two 24 hour events. One called 24 hour generator which will see people working with a facilitator, Chris ryan who is a member at Sydney Front. Anyone is welcome, it’s working in 24 hours as an ensemble to create a brand new piece of work. Chris will lead them through a range of devising techniques and prompts, then 24 hours later they share that with the rest of the festival.

Also Scott Patrick Mitchell from Perth is going to be doing a 24 hour performance poem, set up in a shop front and streaming online. He will perform pre-written material and improv … it’s gonna be insane! The longest he’s ever done this is seven hours.

Other stuff we have includes an amazing range of different works exploring things like mental health, lots of stuff about feminism, and some interesting use of technology in performance. You’ll see a really eclectic mix of performance, movement. Pretty much anything you can thing of, it will be there.