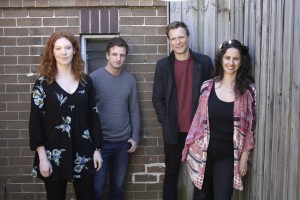 Running until October 4th at Darlinghurst Theatre is a double bill of Australian playwright Jane Bodie’s Ride and Fourplay. Set back to back amidst the cityscape locale of Darlinghurst, the 3 hour-long running time flies by in a flash as you are encouraged to enter in the lives of some unfortunate people who have some eerily familiar qualms as you do.

We start with Ride. Two people wake up in a vaguely messy one-bedroom flat, a nondescript “she” (Emma Palmer) and “he” (Tom O’Sullivan). They are both naked and startled to find that they’ve woken up with a stranger next to them. Their heads pound and swirl from a mess of drinks the night before, but they try to piece together the moments and things that led them to the here and now. So many relatable things appear before our eyes – the hangovers, the confusion, the missing of a shoe, the package of cigarettes bought while drunk – and we begin to place our own stories on top of these individuals. They move through their confusion and end up spending the whole day together; sometimes fighting like an old married couple, other times getting to know each other in ways only strangers can. Throughout the whole day they never learn each other’s name and neither does the audience – it’s really as if we are these unnamed beings. At the very end we learn that they are Elizabeth and Joe – and the lights drop as we see these two finally really meeting each other and looking into each other’s eyes.

Next is Fourplay where Palmer and O’Sullivan make another appearance – this time as Tom and Natasha – two actors rehearsing for a play. Tom has been living with Alice (Gabrielle Scawthorn), his partner, for many years. We can tell they are unsettled; they are no longer intimate and they don’t seem to understand one another. Alice was previously an actress but gave that up to find something more “steady” – she now works as a disability carer and works a lot with a client called Anna.

I spoke to Gabrielle before seeing the performance, and she told me that Alice feels “something is not right” and that she feels she needs “to make decisions based on what she wants in her life as well as in her relationship.” Gabrielle, a NIDA graduate who not only acts for the stage but also writes and performs sketch comedy with I’m With Stupid for ABC, ABC2, Funny or Die, and Bigsmoke, feels that Bodie’s writing really “picks at the little details of relationships.” Once under the skin of what each character is really going through, Bodie makes the audience think about their own relationships, and in the case of Alice, Gabrielle believes that we can all relate to her feelings of uncertainty.

Alice begins to realise that Tom is falling for Natasha because he spends most of her time with her and has become distant, and in her grief and agony, she meets Jack (Aaron Glenane), an eccentic man who is also a caretaker of Anna. She finds herself drawn to Jack, and once Tom cheats on her, she finally takes a stand and moves out. Throughout the play, each character speaks mainly towards the audience, moving around the blank stage as if dancing and weaving in order to avoid one another.

Both plays compliment each other because of how relatable these characters can be to anyone who has ever been young and in love, or who has ever felt at a crossroads in their life. Although the night was long and sometimes too close for comfort, the lessons learnt and exposed are placed carefully in your mind as you float out of the theatre, wondering where exactly you can go next.