lip lit: a few days in the country, and other stories 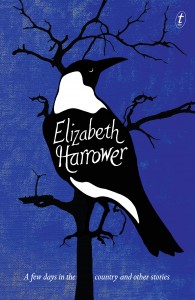 Elizabeth Harrower’s ‘new’ collection of short stories, A Few Days in the Country: And Other Stories, is enchanting. By which I do not mean that it contains magic, or the promises of happy endings.

No; Harrower’s writing is pure, unadulterated realism. Her stories occupy the real world, and make an effort to reveal the lives of real women. But her writing is also passionate. Every line heaves with emotion, creating in the reader’s chest the same anxiety that the characters are experiencing, the same elation, the same disappointment. Her prose is the furthest thing one can get from being purple without being a carbon copy of Ernest Hemingway, but thanks to her simple but bewitching use of language, the reader is given the treat of a collection of short stories that are almost poetry.

A Few Days in the Country is composed of stories that were written and published over the last several decades; the earliest was written in 1962, and the most recent only this year. Several have never been published before this collection was printed. Harrower writes about the world of Sydney in the early 1960s, and about what it was like for the young women living and working in it. Most of the stories are set in this familiar-yet-unfamiliar time and place. It is extraordinarily strange to read a story set in the city you live in, and to both recognise it and find it foreign at the same time – another of Harrower’s many gifts is that she can write about a Sydney I have no hope of ever knowing and make it seem as though it still exists. Even the anachronisms (plots that depend on missed phone calls, the writing of letters, train journeys) don’t hold Harrower back from creating something timeless.

In this Sydney, women cling to their female friends like life rafts, and men enjoy the exercise of power. Harrower returns to themes explored in her most famous novel, the recently rediscovered The Watch Tower, which was originally published in 1966 and reprinted by Text Publishing in 2012. More often than not, the men in Harrower’s stories are abusers: men who keep their women under careful watch, and whom the women tiptoe about, wary and waiting for the next explosion of rage and violence. Despite this grim undercurrent, Harrower offers the reader hope, with her women displaying resilience and insight despite the strain of their circumstances, and, without ever explicitly saying so, Harrower gives the impression that change is on the horizon.

This is another of Harrower’s great themes: the possibility of change, the experience of it. Although she does not provide neat resolutions, she does allow for change to happen, and for the reader to hope for the best, despite everything. At the conclusion of Alice, a story about a young girl growing up in the shadow of her brothers, she writes:

Oh, but she wished, she wished there were someone she could tell. Then, in the middle of this tremendous wish, Alice paused: a great thing was beginning to happen to her. A new thought appeared in her mind, yet Alice recognised it as if it had always been there. The thought said, But I know. I know.

After this she looked the same, and her circumstances didn’t alter, but she was a different person altogether.

Harrower’s charm, perhaps, lies in her ability to be subtle – to allow things to remain unsaid, for conflicts to remain unresolved – while at the same time being so emphatic, so earnest, so full of feeling that the reader is swept up in the passions of her characters, while accepting the stories’ ambiguous endings and harsh realism. That Harrower has, up until recently, been denied a place in the Australian literary canon, is a tragedy – one that can only be remedied by reading her. A Few Days in the Country: And Other Stories is a fantastic place to start.

A Few Days in the Country: And Other Stories by Elizabeth Harrower