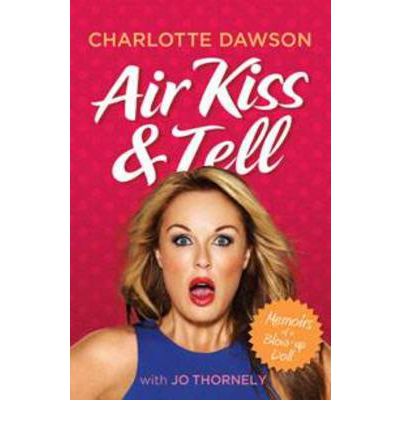 Charlotte Dawson, Charlotte Dawson…it took me a minute to place the name on the cover of the book. Puzzled, I turned the book over and the blurb informed me she was a judge on Australia’s Next Top Model. That was the one! Yes, I’d heard of her before, but having never had Foxtel and only sneaking the occasional episode of Australia’s Next Top Model when staying in the odd hotel, I knew very little about her before I opened her autobiography, penned with her good friend Jo Thornely.

Well! I couldn’t help but wonder if I’d been living under a rock all these years as Dawson spilled forth the trials and tribulations encompassing her life. To be fair, some of these tribulations occurred during her childhood, before she was well-known. And then some before I was born, or not old enough to know who she was, and a plethora of others while she was living in New Zealand. So it’s no wonder I haven’t been well-versed in the life and times of Charlotte Dawson.

Despite the sometimes dark subject matter of her book, Dawson makes a conscious attempt to keep the tone light throughout. She is candidly honest about her plastic surgery, her depression and the personal attacks on her as a person from the media and critics, yet writes with a sarcastic undertone, lightening these moments. Having finished the book, I can understand why Dawson chose to write the book in this way, but I found the style got rather tiring at times. I was reading a commentary of Dawson’s life, so I didn’t need a Dawson commentary on top of her commentary. And while there are some funny moments in the book, they felt overdrawn out, as though it was a conscious choice to balance out the not so glamorous moments.

Air Kiss & Tell is a wonderful warning of the consequences of pursuing a career in the public eye. Nothing is private. Everything is open fodder for the public to consume; the media predators waiting for their next kill. Dawson left school at sixteen and became a model; by her early twenties she’d retired from modelling and decided she’d like to pursue a career in journalism, so she jumped on a plane to Sydney, from her native New Zealand, and landed in Australia with only a small handful of contacts. She managed to find a position and worked her way up, working for magazines such as Woman’s Day and New Idea, as well as becoming fashion editor for the Today show. Life was pretty good for Dawson, until a disastrous marriage sent things spiralling downhill. After an article detailing her divorce was published in Women’s Day, which was full of lies and defamed Dawson’s character, she embarked upon a seven-year lawsuit against the publication.

It is clear that Dawson’s career has come at a high price. But Dawson writes with no regrets, and has embraced everything life has thrown at her. She’s come to the conclusion that she has no choice, so she may as well have fun along the way, because life is too short. She is constantly judged by the public, and, while sometimes the hits are too much, she’s learned to take it all in her stride and accept that it’s part of the territory.

Air Kiss & Tell really makes you stop and think about judging other people before you really know them. Take Dawson at face value, and she may come across as vindictive, plastic, fake and insincere. And to be perfectly honest, on the surface, her book reads a little plastic and fake. But the further you read, the more you find that Dawson is anything but. She’s sincere, brutally honest, and, okay, while she admits she is a little bit plastic, she knows her place and job and is extremely good at what she does. I challenge her critics to live through everything Dawson has had to endure and come out smiling at the other end. Sure, she’s living a much more fortunate life than so many people, but why should that alone be reason to bully her? She’s worked hard, and continues to work hard, so she continues to stay at the top of her game. Oh, and in case you’re wondering, she’s perfectly happy with her status as a D-lister, thank you very much.

Air Kiss and Tell is published by Allen & Unwin.