lip lit: All The Way Home 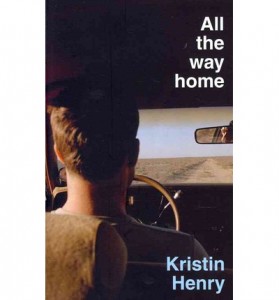 My first experience reading a verse novel was with Dorothy Porter’s El Dorado, which I was forced to read for uni. I was pretty intrigued by the concept at the time, yet while I was reading the book, I couldn’t quite fathom why that particular story couldn’t have been written in prose. Thankfully, I’ve now had the luxury of reading Kristin Henry’s verse novel All The Way Home, and I can’t fathom how her novel could have been written in prose and maintain the same impact.

A verse novel is basically a collection of poetry which works together to form a coherent plot and develop characters; it is essentially a novel written in verse instead of prose. Henry is a talented poet and storyteller. Her novel centres around her American protagonist Jesse, beginning at the end of the 1960s with the death of his mother, when Jesse is a young boy. Henry then takes the reader through Jesse’s childhood spent on the road with his father, before he boards a ship bound for Australia and meets two people who change his life, Flannery and Leon. Henry reveals snippets of Jesse’s life, jumping in time from poem to poem, sometimes only a few hours, or a day, a month; sometimes skipping years, picking up the story at the next significant moment in Jesse’s life.

One of the hardest things about writing a verse novel is unravelling a whole plot while keeping to the restrictions and sparse language found in good poetry, yet Henry makes this feat appear effortless. She consistently produces wonderful poems which would still make sense pulled from the context of the novel, while at the same time engaging the reader in a compelling storyline. She uses the first line of each poem as the title of each, refusing to waste a single word, and italicises lines which are supposed to be speech, alerting the reader to the change in voice, while not completely disrupting their reading of the poem.

It is hard to pinpoint and extract one poem from the novel as a stand-out, as they are all so inextricably linked that each flows effortlessly into the next, but in the poem titled ‘Her name was Flannery’, Henry manages to beautifully capture the moment Jesse first sees his love interest: ‘His eyes followed her fingers,/watched as her bow/ hooked under one of his ribs/ and pulled his heart out.’ The poem is written from Jesse’s perspective, and the reader is invited to share this intimate moment with him. These four lines are so powerful and convey so much meaning, and it is only one example of the evocative imagery littered throughout the book.

It is this imagery that enables Henry to create fully-fledged characters, revealing bits and pieces about them poem by poem, slowly building a complete picture. I particularly liked the way she builds Jesse and Leon’s characters, before divulging their downfall in the same languid manner.

All the Way Home questions and explores the idea of what home actually is. Henry herself migrated to Australia from America when she was eighteen, and has since chosen to stay in Australia. For Jesse, who has spent his life on the road, he finally feels like he’s arrived home when he meets Leon and becomes part of a small community. This is in stark contrast to the Irish Flannery, for whom it is clear that she still considers Ireland very much her home, despite the ties she has in Australia. Then there’s Leon, who’s never been sure of what home is for him, and isn’t convinced he’ll ever discover what is. Henry ultimately suggests that home has a different meaning for everyone, perhaps the only common thread being that a person knows when they have found that place, or person, or thing.

All The Way Home is a striking collection of poetry, weaving a thought-provoking narrative thread through the intricate poems. I devoured the book in one sitting, poring over the careful use of language, searching for a word which seemed extraneous and misplaced, and finding nothing. This book is a wonderful example of the possibilities of poetry, and a good place to start for people who aren’t quite sure about poetry and like having a strong storyline to guide them. And don’t be surprised if you find yourself questioning exactly what ‘home’ means to you.

All The Way Home