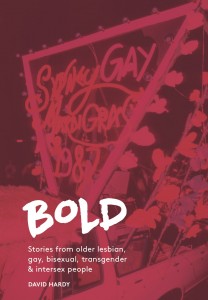 If you’re looking for BOLD in a bookstore, you’ll definitely know when you’ve found it. Its striking cover is mostly red, splashed with the title across the lower half. On the back, it has some impressive cover quotes from Benjamin Law and former Greens leader Bob Brown. Flipping through the pages, you see the many photos collected by the Australian Lesbian and Gay Archives (ALGA) as well as personal ones from contributors. Before you even start reading BOLD, it looks stunning, which has much to do with the work of designer Dan Bisley. And while you shouldn’t judge a book by its cover, BOLD holds up to its grand design.

BOLD is a collection of bold and honest stories from older LGBTI people, edited by David Hardy. Most of the collection’s contributors live in Australia or New Zealand. Every story is different, but the concerns of the older LGBTI community run throughout: the HIV/AIDS epidemic, lesbian feminism, the Stonewall riots, police corruption, the legality of homosexuality, and, of course, coming out.

While the majority of stories in BOLD come from white gays and lesbians, Hardy has certainly made an effort to ensure they’re not the entire focus. The contribution from Dawn Daylight, a member of the Indig Lez women’s group in Brisbane, offers the perspective of an indigenous lesbian as she discusses her journey from being rejected and alone to becoming a role model to the younger indigenous girls in South Brisbane. Hardy’s collaboration with the teams behind the We Weren’t Born Yesterday radio series produced ‘Queering the Air’. The only section focusing on particularly young LGBTI people, ‘Queering the Air’ shares ‘the voices of lesbian, bisexual, gay, trans, genderqueer and intersex people from diverse diaspora and language groups’. Lia Incognita, Arjun Rajkhowa and Pham Phú Thanh Hang provide honest and emotional recounts of meeting older LGBTI people in their respective migrant communities. I only wish they’d had longer pieces.

Many of the white lesbian and gays focus on Australia and New Zealand, but there are a few who look out beyond our shores. One such example is former Greens leader Bob Brown. He has two entries in BOLD: ‘1979’ and ‘Banning Lesbians’ both of which were highlights for me for different reasons. Brown not only is an eloquent and articulate writer, more so than some of the other BOLD contributors, but also has been a part of Australia’s political landscape, fighting for LGBTI rights, longer than most Australians were probably aware of them. ‘Banning Lesbians’ in particular discusses his time in parliament, as he attempted to decriminalise homosexuality and accidentally criminalised lesbianism. While it fits right in with the rest of BOLD, it’s an honest story that is unusual and refreshing for a politician.

Reverend Dr Leigh Neighbour also looks out for the world. He runs the Metropolitan Community Church (MCC) in Brisbane. Reverend Leigh runs the MCC as a human rights church, as an outreach centre for all members of the LGBTI community, young and old, as well those who have had to travel from countries where they might have been imprisoned or killed for their sexual preference or identity. However far Australia may have come, the reverend expresses disappointment at the lack of marriage equality and the kind of message it sends to young LGBTI people.

Hardy’s collaborators often have the chance to sound ‘preachy’ in the self-reflective nature of their stories, but they all mange to avoid this. When the question ‘Is it easier for young LGBTI people now?’ is asked, none of them give an outright ‘yes’. However, contributors like Jill Livestre clearly believe their contributions to both feminism and the fight for LGBTI rights have been forgotten. Not just her contributions, but that of all lesbians:

Some of my friends and fellow travellers died last year, having lived bold and brazen change-making lives. How will they be remembered and known? Woman-centered features of our lives are always too easily erased.

Livestre is not the only woman who discusses what she and her fellow lesbians did during the feminist movement of the ‘70s and ‘80s. From their stories you get the impression that lesbians have had a bad run of it, rejected by both gay men and straight women. Many older lesbians throughout BOLD were in heterosexual marriages and discuss how they fought for their rights to keep their homes and their children after they left their husbands. Although it wasn’t only lesbians fighting to leave their husbands, those who did received little sympathy from their straight counterparts who saw them as perverted. Lesbians had to create their own feminist groups, such as Livestre’s SHE, separate to existing straight feminist groups. Many of the stories in BOLD, of which Livestre’s is the most direct and frank, discuss the erasure and isolation of lesbians throughout the 20th century.

BOLD succeeds to do everything it sets out to do. These stories not only give LGBTI people a voice, but will also validate the LGBTI people who read them. If you don’t identify as LGBTI, this book will give you an insight into what it’s like to live in a world that tells you ‘no’ over and over again, until you can convince it to say ‘yes’.