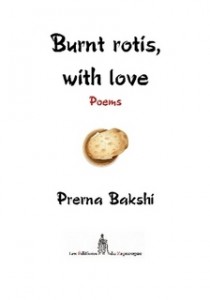 Burnt Rotis, With Love is a bold collection of 54 poems by Prerna Bakshi. The collection deals with powerful themes of poverty, patriarchy, and oppression. Many of the poems focus on issues particular to India—Partition, the caste system, and the specific environment of Indian domestic life—but even these poems have roots in universally recognisable struggles and emotion.

The poems contained in this book not only sear with the political but also touch with the personal. ‘Sometimes the Simplest Words are the Hardest to Say’ is a stripped-back homage to the poet’s sister, who lost her life to blood cancer. The poem is told through the lens of language—the unnameable nature of sorrow permeates this intellectual framing.

‘My Women Have Spoken’ is a brazen look at Hindu goddesses. Instead of viewing female sexuality and carnal desires with shame or repression, this piece rings with pride and ownership. The proceeding poem, ‘The Coward Gods’, examines the flip side of religion. It is a critical discussion of hypocrisy and classism, and is just as unflinching as its previous counterpart.

‘Blood Suckers’ is an astute reflection on societal imbalance, and ‘When the Poor Woman Leans In’ a consideration of the complexity of poor women’s working lives. ‘When the poor woman leans in / it is to plough the land’, writes Bakshi, cleverly deconstructing Sheryl Sandberg’s strategy for female corporate success.

‘Visiting Kolkata After 15 Years’ reflects on what has and hasn’t changed in West Bengal’s capital, and is both a physical snapshot and a socio-political consideration of Indian society. The rich cultural references combined with a communist and feminist perspective fill the poem, as in ‘A Tale of Round Rotis,’ with colour and insight.

Feminism acts as a strong undercurrent in the entire collection. ‘Sexism Doesn’t Exist’ is explicitly critical of gender disparity, and punchy in its to-the-point delivery, but even the less overt allusions to gender throughout the collection lend it a coherent and powerful feel.

It’s the moments when what could be left unsaid is instead explicitly stated that the collection falters. Explanations of meaning are provided as postscripts on some of the poems, and while these provide helpful context, they can jolt the reader out of the flow of the book, and perhaps over-clarify. Similarly, in-poem clarifications and addendums are scattered throughout the poems as in the above-mentioned ‘The Coward Gods’: ‘The priests acted / similar to bouncers, (except only worse).’ The parenthesis-enclosed line arguably detracts from the impact of the comparative device, and feels vaguely unconfident. In addition, an over-reliance on exclamation points is occasionally distracting, and some word choices are clichéd.

These line-level considerations are only minor downfalls, however. Burnt Rotis, With Love is fed with passion and courage, a seemingly genuine hope for change, and strength of conviction. There is a satisfying combination of shorter and longer poems, of light and dark themes, and of abstract and literal phrasing. Bakshi’s collection is inspiring and quite beautiful, and a great example of powerful written rhetoric in an ongoing fight for social change.