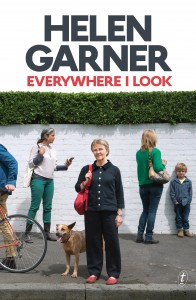 In 2000, Helen Garner was working on the story of Joe Cinque, a young civil engineer who was murdered by his girlfriend. She felt stuck—she had compiled long interviews with Cinque’s parents but had been refused any access to the two women charged with his murder. ‘I had no idea how to write the book,’ she said in her 2000 address to the Sydney Writers Festival, republished in her latest collection of essays, Everywhere I Look. ‘I didn’t have a commanding place to stand.’

That same year the Sydney Justice and Police Museum exhibited a series of crime scene photographs from the 1940s to the1960s. The exhibition and its miserable, desperate subjects fascinated Garner.

I see now that for some years already I had been trying to turn myself into the sort of person who could look steadily at such things, without flinching or turning away. I remember how my friends reacted when I begged them to come with me…most of them really did not want to; they couldn’t understand why I thought they were beautiful.

In Everywhere I Look, Garner’s capacity to gaze unflinchingly at the ugly knots in human behaviour, and the devastating failings of modern Australian society, is on full display. So too, is her ability to find complexity and significance in the mundane, as she does in ‘Before Whatever Else Happens’—one of the few previously unpublished pieces in this collection. In it, Garner describes a woman drinking a martini: ‘The quality of enchanted light that a martini emits in a lamp-lit room: icy, misty, strangely and coldly white—she might have been receiving a star, or an atomic particle, and raising it to her lips.’

Everywhere I Look is a partial collection of Garner’s short essays, diary entries and critical work. The original publication dates of the pieces range from 1994 to last year. Initially it is unclear why, in 2016, her review of 2006 film United 93 is still relevant or where the significance in her recount of her week re-watching Russel Crowe films lies at a time when the actor is largely absent from the media. However, having the pieces in a single place, to be read en masse, offers an experience of Garner’s work that isn’t achieved by reading these pieces individually.

Together, the pieces reveal a grappling with aging and the markers of its process. Common ideas can be traced through pieces written more than a decade apart. Alongside these accounts of slipping into old age is Garner’s clear delight—even fascination—in children and what it means to be a child. There are regular encounters with her three grandchildren and their expansive, impulsive perspective on the world. The collision of old age and youth is beautifully recounted in ‘My Dear Lift-Rat’. Garner has had a haircut, which she ‘was pleased with, in the limited way one dares to be at this age.’ Her granddaughter took one look at it ‘and said with a crooked smile, “I don’t like your haircut, Nanna. You look like Luke Skywalker. It’s dumb at the sides.”’

Threaded throughout the collection are also impressions of Garner herself as a child. In ‘Dreams of Her Real Self’, Garner is in primary school, convinced her mother is the only mother incapable of throwing a children’s birthday party. In ‘Dear Mrs Dunkley’ Garner is seven years old, learning the power of an adverb.

These explicit recollections of her own childhood are paired with recounts of herself as an adult responding with indignant and undue frustration, as a child would. In ‘Eight Views of Tim Winton’ she describes her petty frustration with her fellow writer.

I was jealous because everybody loved his book and nobody loved mine. I managed to pick a couple of squabbles. He seemed baffled by this and for a while half-heartedly played the part I gave him in my neurotic inner-city drama of ‘friendship’, until we both got bored with it and went back to our ordinary cheerful correspondence.

In these moments Garner is able to thread together such gentle self-deprecation and trenchant self-awareness in such a way as to make her response not only endearing but seem somehow right.

In the section ‘On Darkness’, Garner has collected some of her work on court cases and other pieces on real—and devastating—crimes. Her pieces on Rosie Batty and a 17-year-old girl convicted of killing her newborn baby are extraordinary pieces of writing. Garner manages to meld straight reportage with incisive profiles of those involved. The pieces are never sentimental or melodramatic but their quiet, understated recount of unimaginable pain is devastating to read.

This collection also reveals Garner’s investment in the significance of place—how a location informs thoughts, feelings and understanding. Her stories are littered with geographical markers, mostly in Melbourne. Even to someone unfamiliar with that city, the references to streets, parks and suburbs offer a reassuring grounding to her pieces.

Within these markers of geography are other identifiers of place, smaller and more personal features. Garner writes about her efforts to find a table that fits the narrowness of her house, a jar her now-dead mother had labelled ‘sultanas’, then ‘currants’ before crossing that out too and restoring ‘sultanas’. Her recollections of lunches with author Jacob Rosenberg are punctured by a recurring sense that her choices of cafés were never quite right.

Garner occasionally uses simple similes to illustrate an interaction or a feeling. Her unadorned and modest comparisons never reduce or simplify the original description but just offer a slightly swivelled angle to view it from. In this way, Garner’s writing is fantastically accessible—she bypasses the severity and distance many other ‘literary’ Australian writers create in their work.

Garner writes warmly and generously. She often brings into her stories characters from her life with no introduction, as if you must surely know them yourself. Any initial confusion over who this new person is is almost immediately assuaged as Garner guides you through the story, patiently filling in the blanks.

Everywhere I Look by Helen Garner