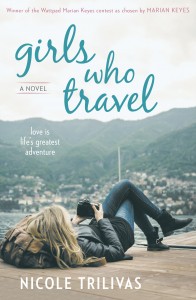 There are two types of people in the world, according to Nicole Trilivas’s protagonist Kika Shores: those who travel, and those who don’t. Kika belongs to the former category: she enjoys the thrill of walking through a city whose name she can’t pronounce, and finding herself an alien culture with nothing but a well-worn backpack. She can’t understand why anyone would want to saddle themselves with a mortgage in the suburbs. Unlike her school friends, “she has no interest in the swag of adulthood, of normalcy.”

Nicole Trilivas captures the addictive pull of travel perfectly in her debut novel, Girls Who Travel. Kika, a young New Yorker with her life ahead of her, is buoyed by the optimism that her traveller’s lifestyle can continue forever. Unfortunately, a yearlong around-the-world backpacking trip leaves Kika short of money, and relegates her to living with her mother and being the “office bitch” at a corporate job that she hates.

Kika is determined to experience the world, even if it means spending all of her savings and avoiding anyone who doesn’t share the same values. She has that slightly pretentious attitude that many of us take up when we first discover “serious” travel. In her mind it’s all about the “authentic experience”, not “packaged group tours on shiny buses pumped with recycled air.”

But she’s not unlikable when she shares these opinions, because she also has a healthy dose of insecurity about her choices. She worries about being left behind while her friends take the more traditional path—serious careers, marriage, McMansions and children. And that’s where Girls Who Travel really succeeds. It highlights the dilemma we all face in our 20s, when we’re still straddling the boundary between student life and the seemingly monotonous adult world. We want to be able to carve out a place for ourselves without losing our identities, whether that means finding a career that doesn’t force us to become cogs in the corporate machine, or a home that doesn’t strip us of our adventurous spirit.

For Kika, who ends up in London after taking up a job as a nanny, this dilemma really comes down to her choice between two boys: Lochlan, a free-spirited Irish backpacker, and Aston Hyde Bettencourt, the Oxford-bred English boy next door. It isn’t hard to see where this love triangle is heading the moment she, Lizzie Bennet–style, dismisses Aston as being too snobbish, but it’s still an exciting, sexy little romance that should keep fans of the genre happy. In the end, it’s satisfying to see Kika learn to let go of the past and open herself to something scary and real.

Such is the charm of this book. Kika is such an entertaining heroine that it’s fun watching her flit from one bad decision to the next. She’s sardonic, fierce and outspoken—the perfect romantic heroine. She is surrounded by a few broad stereotypes, including her employers, the wealthy Darling family (they have their own private jet!), and Bae Yoon, the backstabbing corporate nemesis who seems to be auditioning for a part in The Devil Wears Prada. Fortunately, they don’t detract from enjoyment of the novel. If anything, you come to expect characters like these in a world where your heroine can be whisked off to London days after losing her job.

Girls Who Travel is the epitome of an enjoyable, breezy beach read. But if you’re staying put this summer, and you have itchy feet, then this is the perfect book for a little vicarious adventure.

Girls Who Travel by Nicole Trilivas