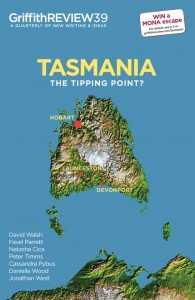 Tasmania has a lot of problems that ‘mainlanders’ might not know about. As Jonathan West writes in his essay, “Obstacles to progress”, ‘Tasmania ranks at the bottom among Australian states on virtually every dimension of economic, social, and cultural performance.’ It’s perhaps timely then that this island state is investigated through an entire issue of eminent Australian journal, GriffithREVIEW edition 39, Tasmania: The Tipping Point?

Through a series of short stories, essays, and short memoirs, Tasmania is attended to. The front cover picture – a zoomed in view of a map of Tasmania rendered upside-down such that the little red dot signifying Hobart is the uppermost Australian city – both captures the journal’s treatment of Tasmania and points out the fact that a close-up look is a novel one. Indeed, how often do mainlanders even hear about the goings on in Tasmania? Moreover, how often do we give the little state any thought whatsoever?

The natural beauty and cosyness of Tasmania is emphasised in the journal. Romy Ash’s short story, “Damming” so beautifully described the pristine landscape that I was just about ready to book a flight to Tassie to take a swim. ‘There are clouds in the water… They pass the surface quickly. Like a pop-up book the other mountains look unreal, folded up from the lake…He’s swimming towards sheer cliffs’. Natasha Cica highlights the friendliness of Tasmanians in her essay, “The cracks are how the light gets in”, ‘I can rely on my neighbours to take the time to chop my wood, bring me home-grown flowers and cook hand-caught squid for dinner’.

It’s unfortunate that Tasmania’s loveliness is cruelly juxtaposed with the poor metrics West refers to. In “Canary in the mine”, Richard Eccleston describes Tasmania as ‘the poor, mendicant cousin’ of Australia. Indeed, through the journal it is emphasised that Tasmania is an economic weight on the rest of the nation, money goes in, but relatively little comes out in terms of productivity and growth.

What seems most interesting about this journal is neither the environment nor the pessimistic gloom reaped from viewing macroeconomic data on the state. Rather, through many pieces, the journal illustrates how the wide Tasmanian context is manifested in the daily experiences of individual Tasmanians.

Take Danielle Wood’s amazing, “Hotel Royale on Liverpool”, about her quest to receive hospital treatment for her son. ‘Hotel Royale’ is an ironic euphemism for the Royal Hobart Hospital, ‘a neglected and often troubled institution’. She describes getting appropriate care as a ‘battle’. Overworked staff were barely able to pay her or her son very much attention, and as her son got better he was given ‘mega-doses’ of antibiotics so that his bed would be vacated quickly. When people talk about Tasmania being a drain on the national purse, Wood reminds us that it pays to remember that real people, who are sick and often vulnerable, are the ones who pay for austerity measures and cuts in the health budget.

Other issues which are explored within the rubric of the personal meeting the political include those of identity, such as sexuality and Aboriginality. Historically, Tasmania has had very backwards policies on the legality of same-sex relationships, with an uncomfortably recent past of criminalising male cross-dressing and sodomy. Yet, as Rodney Croome explains in “Churning the mud”, Tasmania has been propelled to progression on this matter, working towards marriage equality. This propulsion was led, Croome argues, by the fact that ‘homosexual decriminalisation was rarely out of the news for almost a decade’.  Indeed, once the most inequitable of laws were repealed, there was a large growth of same-sex couples living in Tasmania. Tasmania’s political progress was based on its internal discussions and demographic shifts. In terms of Aboriginality, several articles in the journal concern themselves with political and institutional measures which worked to stigmatise, discriminate against, and in most extreme cases, commit ethnocide against Aboriginal people. What measures can be taken to overcome this history, or whether overcoming this history is even possible, are open questions.

Ultimately, the problems Tasmania faces are still there, but from reading the journal I got the sense that through creativity and effort, Tasmanians need not necessarily accept their fate as Australia’s low achievers. In “We need to talk about the northwest”, Matthew Evans promotes this problem-solving attitude in his suggestion that Tasmania could benefit from marketing its pure and fertile environment when selling food products produced there and resisting homogenisation. It can’t produce things more cheaply than China, for instance, but it could produce something better thanks to its air and soil quality. A way to become more competitive in the market could be to assert the unique quality of the products that Tasmania could no doubt provide. Creativity, along with the assurance that Tasmania has solved some of its problems before is hopefully enough evidence that the state can keep doing so. It’s us mainlanders who are sitting on the sidelines of such a project.

One thought on “lip lit: GriffithREVIEW 39”