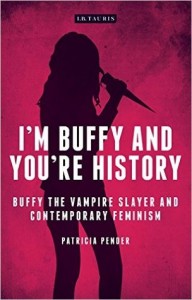 From its inception as a (widely panned) movie, through to the iconic TV show and comic book series, Buffy the Vampire Slayer (BTVS) has proven to be an ‘undying’ piece of pop culture. Celebrated for its punning protagonist Buffy Summers and her ‘Faith’-ful Scooby Gang, BTVS is canonical in its portrayal of female strength. In I’m Buffy and You’re History: Buffy the Vampire Slayer and Contemporary Feminism, author Patricia Pender tackles Buffy from an academic perspective, but also freely admits to having been a fan of The Buffster ‘for more than 20 years’. The juxtaposition between academic analysis and an enthusiasm sprung from committed fandom creates a compelling balance of credibility and enjoyability in I’m Buffy and You’re History.

Pender, a Senior Lecturer in English at the University of Newcastle and member of the Slayage: The Journal of Whedon Studies editorial board, locates Buffy (referring here to the program and protagonist) as a feminist text/icon. BTVS, Pender asserts, is ‘political and transgressive’ in its tackling of thematic considerations such as female empowerment, friendship, and LBTQ+ representation. Pender situates BTVS as a third-wave feminist text, with the show’s often-contradictory exploration of feminist concerns being held to account. Pender’s candid discussion of BTVS’s contradictions provides the book with such integrity. Pender meticulously outlines opposing views on BTVS’s feminist potential, and argues for a moderate stance that accepts critical interpretations while still allowing for enjoyment from fan and feminist positions.

Following the broader question of BTVS’s contribution to the feminist landscape, Pender examines the show’s arguably lacking representation of racial diversity. One chapter discusses the seventh and final (television) series’ attempts to incorporate a greater breadth of characters into rotation, as well as the shifting focus from individual power to collective sisterhood. As throughout the book, Pender’s analysis is executed with neither undue deference nor sweeping censure. The proceeding chapters dive deep into The Slayer’s world, and it is at these moments that die-hard Buffy fans will rejoice. Pender ignores Buffy’s resident bad boys Spike and Angel in her discussion of hegemonic masculinity, and instead focusses on Riley Finn, Buffy’s Iowa-born beau. Finn fans be warned: Pender doesn’t hesitate in her discussion of Riley’s old-timey patriarchal downfalls.

In the chapter ‘“From Beneath You It Devours”: Andrew and the Homoerotics of Evil’, Pender presents a queer reading of BTVS, using secondary character Andrew Wells as a case study, again sidestepping some of the more obvious queer characters such as Willow or Tara. Paralleling her position on BTVS as a whole, Pender asserts that Andrew is complex and often contradictory, with both deep flaws and the capacity for redemption. His depiction of (largely closeted) homosexuality is similarly open to conflicting interpretations, and Pender negotiates this contention with sophistication.

In the sub-chapter ‘Metalepsis in the mash-up: Parsing the sexual politics of Buffy vs Edward,’ Pender appraises the Webby award-nominated YouTube video Buffy vs Edward, which combines scenes from BTVS with instances of Edward Cullen (the lusty vamp from teen movie Twilight – as if you didn’t know) being, well, stalker-y as hell. As fascinating as it is to compare the antiquated gender roles arguably presented in Twilight to the more progressive politics of BTVS (notably an older work), it could be questioned why so much attention is being devoted to something external to the Buffy canon. Pender answers this query in her discussion of the innumerable journal articles, Wikipedia entries, and official and unofficial guides available on BTVS. ‘Buffy remains a firm contender for the “most studied” award,’ says Pender. Rather than rehashing old ground, I’m Buffy and You’re History tackles relatively fresh topics, or at least returns to old favourites with fresh faces as case studies. Pender’s book demonstrates not only the staying power of the cult TV show, but the almost endless possibilities for its contribution to critical discussion. The ideal book for passionate Scoobies and Whedonites, and even more so for those seeking to delve into scholarly analysis of The Buffinator, this book slays.