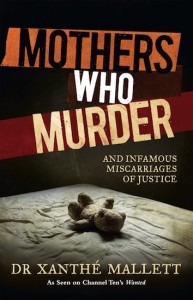 There are few crimes worse than killing your own child – it appears to be an action which goes directly against our nature. And yet, on average, twenty-seven children are killed by their parents in Australia each year—with around half of them murdered by their mother. The question of what would drive a mother to such an extreme act is morbidly fascinating. Trials of mothers accused of murdering their children draw great publicity and linger in the public memory.

In her book (which has also been made into a television program of the same name), Mothers Who Murder (And Infamous Miscarriages of Justice), Dr Xanthé Mallett seeks to establish not only what motivates these women, but whether their motives differ from those of fathers who kill their children. She questions whether women accused of this crime in Australia are given a fair trial and if the perpetrators of these crimes aren’t also victims.

Mallett applies her expertise as a forensic anthropologist to re-examine famous cases of murdering mothers, or at least mothers accused of murder, in Australia. Starting with the nation’s most infamous case, the charges brought against Lindy Chamberlain for the murder of baby Azaria, Mallett re-examines the available evidence to offer an informed opinion as to whether each woman is, in fact, guilty. She also considers other factors that may influence a verdict, in particular the use of expert witnesses, who in several cases have later been discredited, and the high profile of these cases in the media.

For some of the cases Mallett presents, the question is not why these mothers killed, but did they? As has been proven in the case of Lindy Chamberlain, the courts don’t always get it right. Using the available evidence, Mallett puts forward a convincing argument that some of Australia’s worst killers may be innocent.

For example, Kathleen Folbigg was initially believed to have lost four children to natural causes. It was only the number of deaths that brought her under suspicion. Mallett raises important questions about how the investigations into such deaths are carried out and how these murder trials are conducted.

In those cases in which the mother is undoubtedly guilty, Mallett convincingly demonstrates that these women rarely act out of malice. Rather, they themselves experienced childhood abuse and, more often than not, suffer from a mental illness, such as post-natal depression and postpartum psychosis. Our understanding of these illnesses is fairly recent and our inability to diagnose and treat them in the past left many women without the support they needed to cope.

Perhaps the most heart-breaking cases Mallett investigates are those in which the killing of a child is the final blow in a long history of abuse. In the case of Rachel Pfitzner, convicted of murdering her two-year-old son Dean Shillingsworth, the family was known to the Department of Community Services, with ten ‘at risk’ reports filed on Dean’s behalf, and eleven on behalf of his sister. They were assigned several case workers from Family Support Services, and Dean’s grandmother had been awarded full custody, though Pfitzner refused to give him up. In the lead up to Dean’s murder Pfitzner failed to meet with her parole officer, psychologist and case worker and her abusive behaviour towards her son was known to many, but nothing was done.

Mothers Who Murder is a grim read. Mallett doesn’t contest that many of these women are guilty of heinous acts; however she does paint a broader picture that gives these crimes context and shows them to be consequences of larger failings. In many cases, they are crimes that might have been prevented through a better understanding and treatment of mental illness, and more diligent and better resourced community services.

I don’t believe in monsters, and I started this book with morbid fascination, keen to understand what would motivate a woman to commit such a heinous crime. However, I arrived at the end believing monsters would be more palatable than the sad and tragic scenarios put forward. Ultimately, as a society, it seems we are quick to point fingers but lack the perceptiveness to view these crimes as symptoms of greater ills.