lip lit: my year of reading only female authors 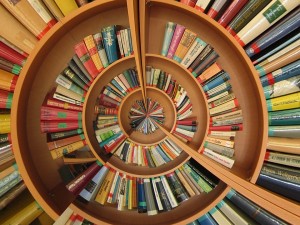 As a lifelong book nerd, I like to think I consume a balanced diet of fiction novels. I grew up reading books by Enid Blyton and Roald Dahl. I went through periods of reading books set in India (Vikram Seth, Arundhati Roy), America as seen by immigrants (Amy Lee) and the American south (Harper Lee, Alex Haley). My favourite authors are Haruki Murakami and Salman Rushdie. I went through a period of reading everything written by Neil Gaiman, Nick Hornby and Douglas Adams. The Harry Potter series is still my go-to option when I want to be lost in a fictional world. That’s a good range of genres and origin, right?

What I didn’t realise was that, although my reading list was culturally diverse, it was slightly skewed towards male authors. This had a lot to do with my lazy attitude as a book consumer: I only pick up books that I have heard about, books recommended by friends, or books stamped with a shiny ‘New York Times bestseller’ sticker.

The problem with this approach results from the imbalance in how male and female writers are reviewed. In Australia, the Stella Count is the most comprehensive survey of the ratio of men and women authors reviewed in major Australian papers, magazines and review journals.  In 2014, the two major national papers, the Australian Financial Review and the Weekend Australian reviewed 77%:23% and 69%:31% male to female authors respectively. Similar research in The Guardian found that the UK is no better: in March 2013, female-authored books comprised 8.7% of books reviewed in the London Review of Books, 26.1% in the New Statesmen and 34.1% in The Guardian.

This explains why for centuries, female authors have adopted male or gender ambiguously pseudonyms to get their manuscripts read by male publishers. Literary sisters Charlotte, Emily and Anne Brontë first published their works under the male pseudonyms of Currer, Ellis and Acton Bell.  Sadly, bias still exists today: Joanne Rowling published as J.K. Rowling because her publisher thought Harry Potter’s target young male audience might be dissuaded from reading a book written by a woman.

I realised that, to deal with this imbalance, I needed to proactively seek out fiction novels written by women. So for the whole of 2015, I only had one reading criterion: read books written by women irrespective of the genre.

First: a confession. I’ve been turned off reading travel memoirs after attempting to read Jack Kerouc’s On the Road and Che Guevara’s The Motorcycle Diaries and failing because I couldn’t relate to their senses of adventure or coming-of-age stories. Throughout the year, I steered towards women who had extreme travel adventures to see if I found their storytelling more engaging. I read accounts that bordered on insanity, such as Cheryl Strayed’s Wild and Esther Freud’s Hideous Kinky.

I was pleasantly surprised to realised that I could relate better with these narratives and how these women battled their internal demons. I saw a bit of myself in them as they related their adventures as single female travellers—backpacks that they could barely carry, sleazy men at campsites, needing a male companion to feel safe. Both books have been adapted into movies but Hideous Kinky in particular was an intriguing read because it is not the usual travel memoir about backpacking around the world. It is Esther Freud’s autobiography of her unusual childhood—her mother, who was unsatisfied with their life in England, decided to move to Marrakesh and explore Sufism while living almost in poverty.

I also used the year to tackle my own prejudices that saw me dismissing some books. The worst was putting off reading Audrey Niffenegger’s The Time Traveller’s Wife because I assumed it was pulp fiction romance and therefore not in keeping with my slightly pretentious reading taste. In actual fact, it is an intriguing science fiction novel about a man whose life clock randomly resets so he finds himself bouncing around in his past, present and future while maintaining a relationship with the woman he loves.

Another error I made is assuming that young-adult novels cater only to young adults. You’d think that someone who reads Harry Potter would know that by now, but we all have our blind spots. Thanks to my year-long project, I read Susan Beth Pfeffer’s Life As We Knew it. The novel is told through protagonist Miranda’s diary entries, and details how she and her family have to battle starvation and freezing temperatures to survive when an asteroid hits the moon and causes natural disasters and uncontrollable climate change. This led me down a rabbit hole of other dystopian novels, including Margaret Atwood’s The Handmaid’s Tale, which scarred me as much as George Orwell’s 1984 did.

I also re-read Jhumpa Lahiri’s The Interpreter of Maladies and Chitra Divakaruni’s Arranged Marriage for old times’ sake. This time though, I sought out other Indian-American female authors like Mira Jacob whose debut novel, The Sleepwalker’s Guide to Dancing, is a story about a patriarch who starts talking to ghosts and about how this affects his family. This unexpectedly turned out to be my favourite page-turner of the year.

Twelve months later, I started reading 24 books and completed 18 books of varying genre. Their protagonist are male, female, young, old, precocious, immature, heroic and anti-heroic. Some stories are about brute strength and endurance; some stories are about resilience. That really covers the broad spectrum of fiction novels, so why don’t publishers and reviewers think the same?