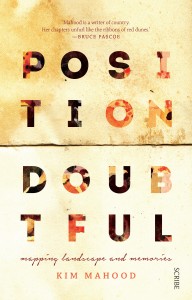 The book’s title takes inspiration from Mahood’s father, who used to find and label locations on maps as ‘Position Doubtful’, because the terrains around their cattle station in Mongrel Downs, where Mahood grew up, were so vast and isolated that it was difficult to plot them accurately.

In writing the memoir, Mahood drew from journals that she kept over 10 years, scribbled on scrap paper or handy notebooks. As a self-sufficient artist, armed with a ute, bag of swag and beloved dog Slipper (later with her current four-legged companion Pirate), Mahood travels from her Canberra home to remote Tanami and Mulan in East Kimberley.

For coastal city dwellers, it may be easy to mistake Tanami as Japanese and Mulan as the Chinese Disney princess, instead of remote Aboriginal communities in Western Australia. At its heart, the book is about Mahood’s quest to understand more about the land and people most Australians know so little about. She was driven by an intense curiosity about these terrains and the traditional owners of the land – the Walmajarri and Nagardi people. Mahood seeks inspirations for her own creative projects in these outback towns – often unwittingly because the land and people are never predicable. Mulan is alive with community projects. Mahood took up residency with the local art centre and later helped to manage a women’s shelter. The most significant task she undertook would be the Mulan mapping projects, initiated in 2004, which challenged and expanded Mahood’s sense of identity and artistic skills.

The book tells vivid tales of the matriarchal communities. As someone all too familiar with being treated as ‘a fool’ for minor slights because she is female, Mahood records stories about herself and these women with their strengths and foibles. There is jealousy, fury and grief. There is selfishness. There is generosity.

As a white person, a kartiya, Mahood has a complex relationship with the Aboriginal traditional owners. The Warlpiri people she grew up with bestowed her with the skin name Napurrula, including her as part of their community. The Aboriginal women adopted her as their ‘skin’ daughter and sister – related not by blood, but through their affinity with the land. It is a tumultuous relationship of constant negotiation and exploration of common connection.

Mahood maps these connections through the medium of mapping. The mapping projects attempt to reconcile the Aboriginal histories with western science. Significant sites are geographically plotted and studied by archaeologists and scientists, while Aboriginal elders tell their stories about ancestors and dreaming. Mahood, believing that “stories are enmeshed,” held high hopes for the mapping process. There is instead a sense of frustration and bereavement, as time moves at its own unforgivable pace. With the passing of each Aboriginal elder, the maps are highlighted as stark reminders of stories not told, knowledge not passed, and languages no longer spoken.

Mahood’s use of language goes beyond English. The assumption that English is Australia’s national language overlooks the fact that Aboriginal languages such as Jaru or Walmajarri are perishing. Mahood’s memoir illustrates the folly of assuming any of the Aboriginal languages can be translated, word for word, into English and retain their complete meaning.  Mahood observes with amusement at the righteous anger of a Canadian student that an Aboriginal dictionary did not contain the word ‘beauty’: the young student mistook such absence to be a racist suggestion that the particular language had  no concept of beauty. Yet, as Mahood explains, the meaning of the word is easily manifested through non-verbal actions.

Mahood captures minute details of life in vivid detail – what someone was eating, what someone was wearing, little snide remarks. Blue is never just blue – it is deep indigo, or ultramarine. Her visual artistry creates a sense of immediacy. ‘Position doubtful’ mapping is very much Kim’s metaphor for herself and also for the Aboriginal dreaming and storytelling. Nothing is pinpointed exactly – nor can be.