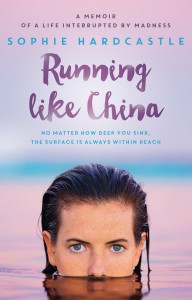 Sophie Hardcastle’s memoir Running Like China is not just about shattering the stigmas of mental illness or about providing a safe place for those who may be going through similar issues. Running Like China is also about an artist who finds her true self through the good and the bad times, and who emerges victorious and ready for whatever will be thrown her way next.

When I spoke with Sophie about her novel, I was immediately struck with a sense that I was talking to someone who had a lot of wisdom to give, and was also very willing to share her experiences with others in an open and honest way. Sophie has not yet hit the quarter century mark, but she has knowledge beyond her years.

She has struggled with mental illness since she was 15, was then misdiagnosed with depression and went through five hospital visits before she was finally diagnosed with bipolar I disorder whilst finishing her HSC. Running Like China sees Sophie tell her story in a raw and powerful memoir form, but with each sentence flowing to the next like a perfectly sewn patchwork. Sophie is indeed a writer, and she is using her skills for the betterment of mankind.

Running Like China follows Sophie’s childhood growing up in the beautiful Northern Beaches of Sydney. Sophie is a talented and blessed young girl who enjoys surfing and has a supportive and caring family. She has everything going for her.

Yet things take a sour turn when Sophie hits mid-puberty. She is suddenly utterly depressed and loses interest in doing the things she loves. The next couple of years of Sophie’s life involve a variety of acts that Sophie performs in an attempt to cure herself, such as having promiscuous sex, taking drugs, self-harming, binge eating and purging, and finally, a suicide attempt.

Through all of this, Sophie emerges from beneath the dark waters of mental illness because of the strength and persistence of her family and her friends. She meets many people along this intrepid path who guide her towards the light, and although it takes time and a hell of a lot of resistance on her part, Sophie reaches the surface and is able to break through. She is finally able to realise her dream of being an author and is now able to accept her illness for what it is: a mere part of her, but not the complete story.

What’s most exciting about Running Like China is that anyone who reads it can gain an understanding of what it’s like living with a mental illness, and through this understanding, can then apply positive actions in real life. Whether you are experiencing mental illness or know someone who is, there is sage advice in Running Like China that can bring you back to yourself, or help you bring back those who you love.

Running Like China also makes me excited for what’s next to come from this passionate and talented writer. Sophie ends the memoir stating that she has found herself: “I have found the girl who will forever chase something that is greater than herself.” This girl, who has struggled through traumas that are unfortunately now all-too-common, has turned something bad into something good, and from this, she has opened up a path that is yet unmade and unruly, but one that is truly her own as a writer, a motivator, and a mental health spokesperson.