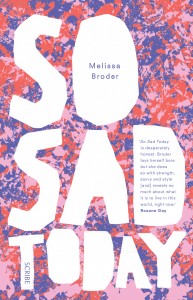 So Sad Today is a book of personal essays by Melissa Broder, detailing her struggles with addiction, anxiety, panic disorder, relationships and an overwhelming fear of death. The book originated from an anonymous Twitter account of the same name in 2012, tweeting about the human condition in catchy one-sentence bites that were in equal parts funny and depressing. It wasn’t until May 2015 that Melissa Broder claimed ownership of the popular Twitter account in an interview with Rolling Stone – by that time, she had over 300K followers and the number has continued to climb steadily upwards. So Sad Today is Broder’s first collection of essays and has already received rave reviews from across the globe.

Yet, despite all of the hype, I really didn’t like it. This came as a surprise to me, as the book sounded exactly like the type of thing I love to read. A humorous memoir about anxiety, depression, romance and what it means to be human – how could it possibly be anything but incredible? My own personal story, though quite different to Broder’s on the surface, is tinged with the same struggles with eating disorders, panic attacks and existential dread. Since losing my little brother ten months ago, I’ve become increasingly aware of just how much the word ‘death’ seems to terrify most people, to the point where to even mention it leads to awkwardness, if not downright alienation. So I was pleased to see that such a popular writer was dealing with the subject head on, rather than shying away from the more difficult aspects of being a conscious and impermanent being.

However, I often couldn’t relate to what she has written, even where I myself had experienced similar things. For me, the main problem with Broder’s essays is that they focus on appearing deep and meaningful at the expense of substance. There are entire pages of words that, while sounding very pretty strung together, don’t say much. In her essays, Broder often writes about having heart-to-heart conversations with romantic interests about the universe, death, love etcetera, but never fills us in on the actual content of these conversations – something that would be a lot more interesting than many of her essays, including one made up entirely of lengthy sexts between her and a former partner.

On that note, there is a lot of over-sharing in this book. And I mean a lot. For example, by the fourth page she is rambling about eating her own vaginal secretions. Now, I personally love a good over-share. Nothing makes me feel more connected to another human being than realising that, despite the airs we put on in public, we’re all secretly as disgusting as each other. And, as a feminist, I feel like her insistence on telling the reader about how she went down on a guy after he took a dump, or how she wrote her lover a note using her own menstrual blood, should make me want to high-five her for her sex-positive attitude. But her over-shares don’t add to the overall story; rather, they seem to exist simply so the reader can appreciate how brave she is for revealing them. In essence, they seem to be there for shock value, and unfortunately the minute details of other people’s sex lives just aren’t that interesting.

Of course, I understand that personal essays don’t need to convey deep ideas to be worthwhile. I’m a huge fan of David Sedaris and, even when his essays aren’t about anything in particular, I still find them hilarious, interesting and relatable. But I just couldn’t relate to Melissa Broder.

Therein lies my problem with this book – until the last few essays, she doesn’t give me a reason to care. While the quote from Roxane Gay on the front cover says the book ‘reveals so much about what it is to live in this world, right now’, I would disagree. Rather, So Sad Today reveals what it’s like to live as a very particular person in a very particular part of the world. Much of the book is self-indulgent and, despite promises of exploring the human condition and delving into difficult emotions, many essays were about trivial things that I just couldn’t bring myself to care about.

That being said, there were parts of the book I did like. The last two essays in particular were quite good, and if the whole book had been of that calibre this review would be entirely different. One of these was about her husband’s chronic illness and the impact that it had (and still has) on both of their lives, while the other was about her ongoing battle with depression and anxiety. Both of these essays were beautifully written, with an endearing mix of sadness and humour that make you want to either high-five Broder or give her a big hug, but they weren’t enough to atone for book’s less illustrious essays.

On a personal note, I think that part of my disappointment stems from the fact that I really thought she might truly delve into the terrifying aspects of being human, which is something that rarely happens in a society that likes to pretend that happiness is always a choice and bad things don’t happen to good people. Instead, there are entire essays dedicated to her Internet addition and the fear she felt after getting her first Botox injection.

However, this is clearly my own issue and not hers. So Sad Today wasn’t written with me in mind and, judging from the gushing reviews across the Internet, I am in a small minority when it comes to my feelings about the book. Ultimately, it’s best to check out her Twitter account and get a feel for her writing yourself. If her tweets really speak to you then you’ll probably love these essays. If, however, you find them similar to your own embarrassing diary entries written when you were sixteen with a penchant for emo music, it might be worth giving this one a miss.

So Sad Today by Melissa Broder