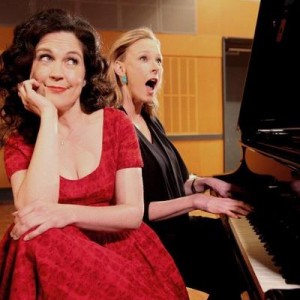 Annabel Crabb and Leigh Sales’ Sydney Writers’ Festival event Our Reading Year was a delightful charm offensive from beginning to end. The two stalwarts of Australian political media had the sold-out crowd barking with laughter within minutes, and their meandering conversation on their ‘reading year’ kept the audience riveted right till the end.

It quickly became apparent that the reading credentials of Annabel and Leigh are almost as impressive as their resumes. They opened the discussion by talking about Hello Goodbye Hello: A Circle of 101 Remarkable Greetings by Craig Brown (despite the fact that, as Leigh pointed out, the book neither came out nor did they read it in the previous year), and steadily made their way through a fascinating reading list. Helen Garner’s entire oeuvre came highly recommended, with specific mention of her new collection of essays Everywhere I Look, while Hanya Yanagihara’s A Little Life was described as ‘itchingly compelling’ by Annabel and too grim to read by Leigh.

Annabel and Leigh have a remarkable talent of making the audience feel as though they are engaged in the conversation, not just listening in. Throughout the session their conversation was punctuated by audience responses – the woman next to me ‘hmmm-ed’ approvingly several times, while someone further back in the crowd loudly exclaimed ‘surely not!’ upon discussion of an outlandish plot.

The session was essentially a live-action episode of their hit podcast Chat 10, Looks3 — a consistently delightful romp that invites you to listen in on their brilliantly interesting conversations about books, cooking, culture, musical theatre, politics and anything else that takes their fancy (if you haven’t already listened, please immediately open your podcasting app of choice and amend this terrible oversight).

In a miraculous turn of events, all of the audience questions were charming and thoughtful. We learned that Annabel and Leigh squeeze in reading on public transport and before bed, that politicians should stop saying their favourite book is To Kill a Mockingbird, and that ‘dementedly’ is Annabel’s favourite word of 2016. During the Q&A one woman revealed she’d brought baked goods for Annabel and Leigh, who immediately jumped from their seats and hopefully asked the crowd if anyone else had baked. Moments later, more audience members wound their way to the front, baked goods in hand.

The hour flew by, and all too soon we all shuffled slowly into the aisles. ‘I have to read more. I’m going to start reading every night before bed,’ someone said. I think Leigh and Annabel would have some suggestions on where to start.

My Name is Lucy Barton, a novel by Elizabeth Strouth

The Girl with the Dogs, a novella by Anna Funder

Gotham, a series of novellas by Nick Earls

The Secret History, Donna Tartt (highly endorsed by both, though not read in the past year)

Do No Harm: Stories of Life, Death and Brain Surgery, Henry Marsh

Farewell to the Father, Tim Elliot