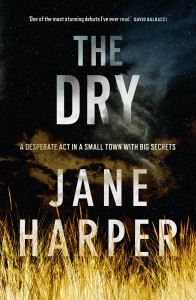 Jane Harper’s debut novel The Dry is a compulsive read. It opens with an apparent double-murder/suicide in the drought-stricken farming community of Kiewarra in rural Australia. Aaron Falk, a Federal Police investigator and former Kiewarra resident, comes back for the funeral – but soon finds himself using his investigative skills when the facts of the case don’t quite add up. Did Luke Hadler murder his wife and son, and then turn the gun on himself, or is there something more sinister at play? Is this tragedy related to the death that saw Falk and his father run out of town over twenty-years earlier? In a town without anonymity, where tempers are as hot as the scorching sun, Falk seeks the answers to these questions. The dual mysteries unravel slowly in this wonderfully paced novel that keeps you transfixed until the final page.

The novel’s setting, the town of Kiewarra, is compelling. Harper skilfully brings to life a small town consumed by drought and financial uncertainty, filled with people who have known each other since birth and are ruled by generational feuds. The stifling heat of the drought echoes the stifling atmosphere of the small town, where people are trapped by history and habit. Harper’s clear, crisp prose is at its best when describing the physical details of the landscape – and especially the effects of the drought. In one particularly affecting passage, she writes:

The huge river was nothing more than a dusty scar in the land. The empty bed stretched long and barren in either direction, its serpentine curves tracing the path where the water had flowed. The hollow that had been carved over centuries was now a cracked patchwork of rocks and crabgrass. Along the banks, gnarled grey tree roots were exposed like cobwebs.

The first-time novelist does stumble when it comes to the women of Kiewarra. If the setting of The Dry is fresh, the female characters that populate the story fulfil all the tropes of crime fiction: Falk encounters damsels in distress, femme fatales, kindly mothers and grandmothers. The physical descriptions of the women reinforce their stock personalities. For example Karen Hadler, murdered before the novel begins, is described as ‘the kind of woman whose youthful good looks had been softened by age and childbirth into something less defined, but just as appealing … She could easily be cast as a how-does-she-do-it-mum in a supermarket ad.’

This is partly a limitation of setting and perspective. The small town is oppressively patriarchal, and many of the men who inhabit it are deeply sexist, a reality that Harper acknowledges and critiques. One male character harangues his female lawyer: ‘What’s wrong? Those tits make you deaf as well as stupid’ and Falk observes, ‘Nothing like old-fashioned misogyny to make the ignorant turn down good advice.’ However with all of the women of Kiewarra defined by their relationships to men – girlfriends, daughters, wives, mothers – Harper does nothing to complicate the view of a rural Australia in which men are the only true actors.

This misstep aside, Harper has written a crime story with a roaring plot that will keep you reading well past bedtime.

The Dry by Jane Harper