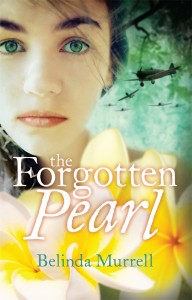 Darwin is probably my favourite place in the world. My parents took my brother and me there on long trips when we were younger and, to me, there’s always been something magical about the Top End. Despite this, my knowledge of how Darwin, and other places north of Australia, were affected during World War II was miniscule. I knew there was an attack on Darwin, and I knew a Japanese submarine managed to get into Sydney Harbour, but that was about it, until I read Belinda Murrell’s eye-opening young adult novel The Forgotten Pearl. Murrell’s novel has shown me just how uninformed I really was about Australia’s part in World War II.

The novel begins in the present day, with sixteen-year old Chloe, who is doing a project on World War II for school. Her task is to interview a family member about their experiences during the war. She suspects she’ll hear nothing interesting, as ‘the war didn’t really affect Australia. It was all fought in Europe, with Hitler and the Blitz and the concentration camps’. Then Chloe’s grandmother, Poppy, sits down and tells Chloe her experiences of living in Darwin during the war, and Chloe learns how wrong she is.

Poppy’s story begins in 1942, when she is 14. Murrell’s vivid descriptions of the 1940s lifestyle throw the reader into the story. Different to the Darwin I’ve known, there are some things which never change – the heat, the humidity, the dangerous wildlife. Yet other things are a far cry from my experiences of Darwin, the most significant being how cut-off the city really was from the rest of Australia. The train line didn’t stretch all the way south and most of the roads were still unsealed, and often unpassable during the wet season.

Poppy and her family are such lovable characters, even as the war splits them into five different locations, spread throughout Australia and overseas. Poppy’s father is a doctor, and her mother is a nurse, and they both work at the Darwin hospital, patching up wounded soldiers. Her older brother Edward signs up for the front line and is posted in Malaya, one of her sisters trains to be a nurse and her other sister lies about her age to join the war effort too. Even Poppy does her part, helping her mother and father out at the hospital, amidst the Japanese bombings on Darwin. One thing I have never quite been able to understand about war is why any man would actually volunteer to be on the front line, fighting. The idea that they wanted ‘an adventure’ never really seemed adequate to me, but Murrell clearly captures the real reason: these men desperately want to do something to help their country. They feel like they can’t continue on with their lives at home while so many other men are putting their lives on the line for their country. For the men, signing up to fight is how they help. For the women, it is training to be nurses, or transcribing intercepted war messages, or working in munitions factories, as Poppy does once she’s graduated high school, which enable them to contribute to their country’s fight.

While I absolutely loved this book and it really opened my eyes to the reality of Australia’s plight in the Second World War, it felt like the plot was created out of the research, rather than research becoming necessary to create a compelling story. I learned so much about the war that I hadn’t known, yet I would rather that came about totally through the story, instead of devised situations which would illustrate certain points.

The Forgotten Pearl is such a perceptive book, shedding light on the reality of Australia during the Second World War, as well as capturing the essence of life in some isolated parts of Australia. When Poppy and her mother are evacuated to Sydney, the blasé attitude of the Sydneysiders, who believe they are too far south to be hurt by the war, is a stark contrast to the brave civilians of Darwin, who are on the front-line but desperate to fight to help save their city.

Belinda Murrell’s novel refuses to tread delicately around Australia and Australian society during World War II. She writes bluntly, stating life as it was, demanding the reader rethink the assumption that World War II was a war for the Europeans. The Forgotten Pearl is a beautiful, insightful novel, reminding us of a bleak time in Australia’s history, but ultimately showing how Australians stuck together to protect themselves, and others.

The Forgotten Pearl is published by Random House.