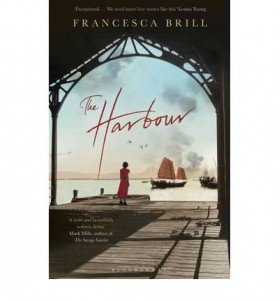 The Harbour is an emotive historical epic which sees an unconventional Western couple surviving the brutality of Japan’s World War II invasion of Hong Kong.

Stevie is a Brooklyn writer who takes pleasure in disarming people with provocative statements. She throws off gender norms impressed by traditional society, and is sensual, determined and proud.  She keeps a monkey as a pet, frequents opium dens, and is on a mission to unearth the history of Hong Kong’s most influential women: the Soong sisters.

Her beau, Harry, is a British army officer in occupied Hong Kong. His lack of prejudice and down-to-earth manner reveals that he is definitely one of the good guys.

Stevie and Harry’s tale of love is gives a big middle finger to the uptight morals imported by expat British high society. Stevie’s relationship with married Chinese man Wu Jishang raises eyebrows, and she does so further when becoming ‘the other woman’ in Harry’s passionless marriage to the dull Sylvia.

The couple begin a lust-filled affair, but as the world crumbles around them their relationship evolves to a powerful dedication. Increasingly frequent reports of merciless violence on the mainland build a sense of dread surrounding Japan’s invasion. Brill successfully illustrates the bizarre reality of wartime – landscapes become nightmarishly altered to the memories of places, people are changed, and threats of violence are daily occurrences.

War obliterates the society that is so carefully tended by the British expats; rape, executions and looting make a mockery of the sterile manners and focus on appearances. The constructed social system falls away like dust, and what remains are people, relationships, survival and sacrifice.

In the minor characters, we receive insight into elements of a Hong Kong on the cusp of societal change. Stevie’s close friend Lily is a depiction of the modern woman’s conflict of identity; excited by progressive English culture but betrayed by the ignorant Western world during the invasion. Chen, Lily’s brother, represents the young idealist Communist movement which is violent, passionate and self-sacrificial. Soong sister Madame Kung is the powerful landlady of many poor villagers, and her extreme wealth juxtaposed with the poverty of her tenants represents the disparate classes.

The Harbour’s steamy evocation of Hong Kong will satisfy any would-be traveller. A screenwriter by trade, Brill’s writing exhibits vibrant visual representations of China’s island colony. Via Stevie and Harry we see the landscape and culture through eyes of outsiders.

This novel is an epic that spans British occupation of Hong Kong to Japan’s destruction of the cityscape. Brill puts forward important questions about rape as a weapon of war, and wonders whether hope amongst desolation can destroy or sustain us.

In the end we see Stevie as a survivor. Her determination to be her own women despite social expectations becomes a fierce resolve to fight for the ones she loves, and to prosper.

The Harbour is published by Bloomsbury.