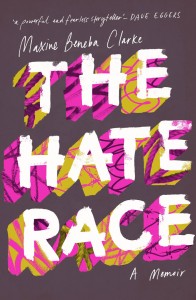 Walking into the playground, early on in primary school, two of my friends got into fight. There was hair pulling, slapping and screaming. A crowd gathered, cheering them on. “You fucking bitch,” yelled one, using the colourful language we were just starting to learn. “You’re a monkey,” said the other. Watching on, I had never heard someone called a monkey before, and at the time had no idea what was meant.

The Hate Race is a childhood memoir. Maxine Beneba Clarke recounts her life growing up in the suburbs of Sydney, as the daughter of parents of Jamaican ancestry who emigrated from England. Clarke details growing up with racism as a constant, both deliberate and accidental, from fellow children and adults alike.

Carlita Allen leaned towards me. ‘You,’ she whispered loudly, ‘are brown.’  …There lurked, in this small girl’s declaration, an implied deficiency. I was in no doubt that there was something wrong with being brown, that being brown was not a very desirable thing at all. I craned my neck to look up at my mother, who in turn looked over at Carlita’s mother. Mrs Allen shrugged and smiled.

There’s plenty of deliberate and grotesque cruelty. The Mrs Allens who hear and don’t care, for one. But there’s also the invisibility of prejudice. As an Anglo-Australian child growing up in multicultural suburbia, I was as guilty as anyone of barely seeing, and not understanding, much of the racism that went on.

When the racial disparity is pointed out in The Hate Race, overwhelmingly, no one seems to care. ‘It’s just a little bit of teasing’ is the best anyone seems to offer. A hairdresser doesn’t know what to do with an afro. A ballet teacher doesn’t understand differing body shapes. A boyfriend’s mother comments on the beauty of mixed race children. A teacher doesn’t believe Clarke’s mother can be an actress. Race tints everyday experiences. The cumulative nature of these experiences is made clear.

Yet within there are stories of youthfulness, of loves and triumphs. There are summers of riding a candy-red bike around Kellyville, in north-west Sydney, and pride in getting cast in a main role in The Twelfth Night. There is nostalgia for a meandering youth.

This isn’t an overarching story of childhood; Clarke hones in on instances of racism and racial prejudice that she wants (or better, needs) to share. As a poetic refrain throughout, she writes, ‘This is how I tell it, or else what’s a story for’ and ‘That folklore way of humming a scale. This is how it riffed.’ This is never intended to be an objective account. This is the personal, examined and made public as the story is crafted.

To begin, Clarke relays a recent experience of being hurled abuse from a car window on a suburban street while collecting her son from school. Clarke writes:

I don’t want sympathy. I want to un-hear what I just heard, un-experience what just happened. If racism is a shortcoming of the heart, then experiencing it is an assault on the mind. You should go drown your fucken kid! Go the fuck back to where you came from, nigger. The cumulative effect of these incidents is like poison: it eats away at the very essence of your being.

This is a memoir whose subject matter, though set in the ‘90s, resonates strongly in the present. Clarke’s book breathes life and colour into stories that are so often swept under the covers of the suburbs.  Here are powerful and vivid stories that need to be shared, serving as a conversation starter in discussing racism in the broader context of Australia.