lip lit: the life and death of sophie stark 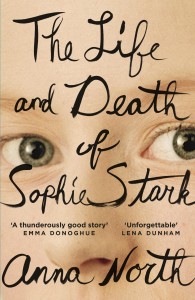 Sometimes, as a reader you’re lucky enough to chance upon a book that draws you in until you are so fully immersed in its world that it haunts you for days. Anna North’s The Life and Death of Sophie Stark is one such book. Indeed, the word ‘haunt’ is apt, as Sophie herself haunts the lives of all who meet her.

The novel is split into sections written from the perspectives of six characters whose lives all intersect with the titular Sophie Stark’s. Each tells of how Sophie, an enigmatic film-maker, has had a profound effect on their respective lives. These characters range from Sophie’s younger brother, Robbie, who tells of their shared childhood and year in college together, to an actress named Allison who enjoys an infuriating love affair with Sophie. Other perspectives include that of a musician and Sophie’s eventual husband, an LA producer, the subject of Sophie’s first film, and finally film reviewer Ben Martin who follows Sophie’s career through his own reviews. Through these collected recollections, the reader follows Sophie as she grows from ridiculed small-town ‘freak’ to respected filmmaker, before her rapid decline in popularity and mental health. Sophie is enigmatic and unknowable—impenetrable even—and fascinates both the reader and the other characters.

This structure effectively enhances the mystery surrounding Sophie, especially as the events in the first two chapters do not occur in chronological order, which lures the reader in to be ensnared by the charm of the rest of the novel. Although the major plot twist is explicitly stated within the novel’s title, it simultaneously shapes how we read the book and yet is easy to forget; Sophie’s death manages to imbue the entire novel with a poignant sadness, and a desire to understand her before this fatal moment. This understanding is never reached, neither by the reader nor the other characters.

One of the book’s strengths is North’s skill in characterisation. Many of her characters are flawed or suffering, incredibly realistic, and imbued with pathos. Take, for example, Jacob, whose mother killed herself, or film subject Daniel, who is recovering from an accident. The magic of this book hinges on us caring about these characters. Each character reveals part of Sophie’s past that the others—and therefore the reader—did not previously know, which ensures we are kept captive by North’s storytelling. Equally if not more clever is how, by revealing Sophie’s effect on their lives, we also gain insight into the personalities and history of each of the other characters. Even the most minor character, Ben Martin, the film reviewer who for the most part only appears through his aforementioned reviews, is given a fully formed personality rather than being merely a neat way to end each chapter. The reviews themselves are another nice touch, especially when read in context within the narrative.

However, The Life and Death of Sophie Stark is a well-executed tale of broken people trying desperately to communicate and ultimately failing. Although it isn’t necessarily fast-paced, it still manages to feel like a rollercoaster of emotions hurtling towards fatal inevitability.

The Life and Death of Sophie Stark by Anna North