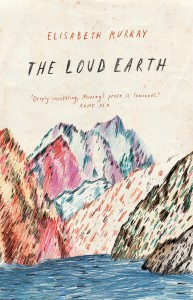 It can be tough for young writers to get a break, even when they are extremely talented. For publishers, they are a risk, and unfortunately many publishers feel they can take only a limited number of risks. Express Media is a rare exception, being entirely devoted to providing young Australian writers with opportunities.

Its recent Hologram project is no exception and is described as ‘the step between a young writer appearing in journals and publishing a full-length manuscript.’ According to the Hologram team, ‘We’re making a place for writing that’s too long, too short or too weird to go elsewhere.’ Under the Hologram imprint, Express Media has recently published two novellas by writers under thirty, No Limit by Holly Childs and The Loud Earth by Elisabeth Murray. I had the pleasure of reading the latter and it made me even more grateful for projects like Hologram that make these publications possible.

The Loud Earth begins on a dark and stormy night in an unnamed tourist town by a vast lake. A recluse tempts a tipsy young woman, Hannah, out of the rain and into her home with the promise of whiskey. Hannah stays and one night turns into many; however, the recluse is in hiding for a reason. She has been acquitted of the murder of her father and stepmother, but remains outcast from the town. Little by little she draws Hannah into her world of firelight, bayonet grass, rolling mist and the ever changing, ever calling lake.

Narrated by the recluse, the language is jagged—the story comes through broken images—and Nature is queen. The stars are ‘sharp as citrus’. The lake at night ‘is a bundle of film: black, shining, full of tales that can only be viewed with some arcane instrument.’ And mist rises ‘like a piece of lace gathered in handfuls.’ From the beginning a slow-burning tension builds, with the narrator dropping sharp fragments of the past and what is yet to come throughout her tale. Meanwhile, the lake, filled with its myriad stories ‘breathing’ at the heart of the book, is an ominous omen that something is rising through the blue depths, preparing to resurface.

The Loud Earth explores the Gothic trope of woman as monstrous Other, capable of violence and the seduction of innocents. When a woman is accused of a crime, that crime is inexplicably linked to her sexuality and she is labelled guilty, cast out from her community before official judgement is passed.

Her real crime is failing to remain within the role her society has outlined for her. She becomes a witch and aligned with nature: fluid, wild and untameable. Murray glories in this. Her narrator is drawn to the sublime: the dark heart of the lake, the womblike caves, the expanse of the sky and the slope of the mountains. Hers is a creeping tale told in cold, light, wind and fire.

On one level the narrator is the witch in the gingerbread house, tempting the unsuspecting Hannah. But on another, she is a vulnerable and lonely woman traumatised by an unhappy childhood ruled over by a wicked stepmother. Like Margaret Atwood’s Alias Grace and more recently Hannah Kent’s Burial Rites, The Loud Earth rejects notions of good and evil and the tendency to portray a woman accused of a terrible crime as an innocent martyr or a wicked witch. Instead, it reveals the narrator as a complex and whole person capable of love, violence, tenderness and fear in equal measure.

Murray’s is a bold and unsettling new voice and The Loud Earth is a dark yet glimmering read. While young writers are searching for the spotlight, they are also dancing in the dark. They aren’t restrained by reader or publisher expectations, or fitting in with a brand, and this gives them incredible freedom. I look forward to reading Murray’s next work and I sincerely hope she is never brought to heel.