lip lit: the love of a bad man 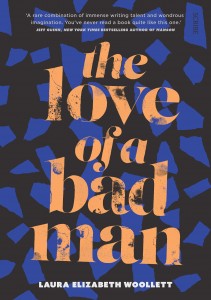 Laura Elizabeth Woollett’s The Love of a Bad Man begins with tenderness:

‘Baby, wake up,’ he says, and he’s kissing my eyelids, my cheeks, trailing his fingers over the bib of my nightgown and it’s so soft it must be a dream.

Woolett’s short-story collection focuses on the lives of twelve women (or in the case of the Manson chapter, a group of women) who have loved men who are notoriously ‘bad’. The idea is intriguing and the execution goes well beyond expectation. The Love of a Bad Man gives sophisticated insight, and is full of empathy and nuance for the people portrayed.

Woollett’s stories firmly centre on the stories of women, regardless of their links to the world’s most notorious murderers, rapists and con men. Woollett shines a light on the women themselves through the use of first-person narration. Mostly, none of these women are decisively a victim or perpetrator, but exist somewhere in that hazy middle ground.

Later in the Appendix, we learn that Jan and Cameron go on to kidnap twenty-year-old Colleen Stan. Colleen is kept in a coffin-sized box and tortured by Cameron for seven years. Before reading The Love of a Bad Man, I’m not sure I could have understood Jan’s actions and complicity in kidnapping Colleen. But through the power of Woollett’s ability to have a reader understand a killer through the murky haze of love, you begin to see how love, abuse and isolation can come together to make a person do the unthinkable.

‘Cathy’, the story of a woman who leaves her husband and children for her childhood sweetheart, is also a highlight of the collection. It captures Cathy’s devotion towards her partner, David Bernie, and her complicity in luring women into their home. This is the one story set in Australia and showcases Woollett’s distinct voice well, and particularly demonstrates her mastery of dialogue.

Woollett is most powerful when she shows the moments of quiet in these women’s lives: the hours Eva Braun spends practicing yoga and gymnastics, or the act of Blanche Caldwell painting her face in the morning, serve to normalise these women’s lives. In these moments the reader, as these women do, experience a respite from the violence. We are able to see who these women are and by caring for them, we become complicit in understanding their choices.

Not only is The Love of a Bad Man an engaging collection of stories, but it also demonstrates Woollett’s mastery of the craft. ‘Charlie’s Girls’ is skilfully written in second person – no easy feat. ‘Veronica’ is written as a series of one-sided letters, in which the tension builds to an unbearable crescendo. And ‘Martha’, the story of a woman who becomes a con artist and murderer after falling for Raymond Fernandez, shows Woollett’s ability to write the body in an insightful and substantial way.

The Love of a Bad Man exhibits Laura Elizabeth Woollett’s distinct and refreshing voice – her writing is captivating. It’s an incredible collection and I look forward to seeing what she does next.

The Love of a Bad Man by Laura Elizabeth Wollett