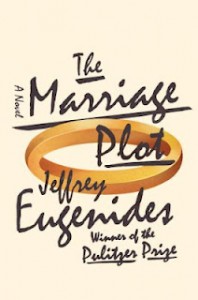 The types of novels that initially sprang to my mind as marriage plots were older English novels by Jane Austin, George Eliot or Louisa May Alcott. With these associations in mind, marriage plots seemed anachronistic.

I then considered the standard genre conventions of a marriage plot: they’re most commonly told from the point of view of a young woman and the plot of the novel concerns who she is going to marry. Initially, she has a number of choices. She goes through some kind of transformation or epiphany that shows her who she should marry. Such books usually end with a wedding – they are comedies. So marriage plots aren’t archaic, but are churned out by Hollywood a few times a year. But don’t worry, Jeffrey Eugenides’ The Marriage Plot is a much better than anything Katherine Heigle stars in.

Madeline Hanna is graduating from college. She majored in English, “for the purest and dullest of reasons: because she loved to read”. She did her senior honours thesis on the marriage plot with the epigraph “There is no happiness in love, except at the end of an English novel”.

The narrative flicks back to the beginning of Madeline’s degree and we learn she had a fling with Mitchell Grammaticus. Mitchell was a theology major, not in a straight-laced way, but in a spiritual way. The fling ended badly but Mitchell continued to love Madeline from afar. In the meantime, Madeline had a more serious relationship with Leonard Bankhead, an incredibly intelligent science major and loner. Not the socially inept science major loner, but the intoxicatingly charismatic loner-type.

The novel arrives back where it started, and the three graduate from college to pursue different paths: Madeline is applying for graduate school, Mitchell goes overseas searching for spiritual enlightenment and Leonard goes to a psychiatric ward to manage a bi-polar disorder. At this point, Madeline loves Leonard, Leonard loves Madeline, but is too sick to be in a functional relationship. Madeline’s parents don’t love Leonard. Mitchell loves Madeline, Madeline doesn’t love Mitchell, Madeline’s parents love Mitchell.

Eugenides asks at the beginning of the novel: “What would it matter whom Emma married if she could file for separation later? How would Isabel Archer’s marriage to Gilbert Osmond have been affected by the existence of a prenup?” Eugenides shows that the marriage plot is a survivor against feminists and divorce – and Ketherine Heigle’s bank account is further evidence of this.

I was only mildly interested as to whether Madeline would choose Leonard or Mitchell. This is probably because I am not a ‘category a’ as Mitchell explains to Madeline: (paraphrased) category ‘a’ are the ones who get married straight out of college to their college boyfriend, category b get married at 28 because it feels right because they want to have babies soon and category c get married at 35 because they give in and suppose they should.  Personally, I couldn’t see why Madeline was thinking about getting married at all.

Instead, the strength of this novel for me was not in its marriage plot but rather in The Marriage Plot as a coming of age novel.  Eugenides’ characters face the terrifying uncertainty of finishing a degree and embarking upon adulthood; the beauty and horror of mental illness and its detrimental consequences; and the result of crossing the thin line that divides love and obsession.

I have a theory that when people say “you must read this book, it’s the best book, it changed my life … yada yada” it always means they indentified with a character. You can certainly have a healthy appreciation for books completely removed from you, but for phrases like “life-changing” it always means the reader was the character. If you, like me, are currently enduring the post-degree, pre-adulthood trauma you are probably one of either Madeline, Mitchell, or Leonard and whatever ones you aren’t, you know friends who are. Eugenides writes endearing caricatures of college students and college ideologies. I particularly enjoyed one about college feminism:

Male oppression of women wasn’t just a matter of certain deeds, but of an entire way of seeing and thinking. College feminists made fun of skyscrapers, saying they were phallic symbols. They said the same thing about space rockets, even though, if you stopped to think about it, rockets were shaped they way they were, not because of phallocentrism, but because of aerodynamics. Would a vagina-shaped Apollo 11 have made it to the moon? Evolution had created the penis. It was a useful structure for getting certain things done. And it if worked for the pistils of flowers as well as the inseminatory organs of Homo sapiens, whose fault was that but Biology’s? But no—anything large or grand in design, any long novel, any big sculpture, or towering building, became in the opinion of the women Mitchell knew in college, manifestations of male insecurity about the size of their penis’.

Eugenides said when he discussed this book on Radio National: “Books are like drugs that you ingest. You become under their influence for a certain amount of time until you come to and go to the next one.” If you are at uni, just finished uni, love reading or have ever been in love, you will be find yourself find yourself happily under the influence of Eugenides’ characters.