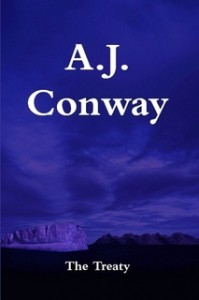 We live in a time when writers are spoilt for choice; they have more power than ever to take publishing into their own hands and share their words with the world.

A J Conway is one such writer who has chosen to control her words and go down the self-publishing route. Once considered the very last option for writers and looked down upon in the industry, now it is considered a viable and sometimes even preferable path to publication.

Self-publishing is different to traditional publishing. In the traditional mode, a writer submits a manuscript to a publishing house, and, if the editor likes the manuscript, they’ll offer the author a contract. The publishing house then takes care of everything: editing, typesetting, cover design, distribution and marketing. The author does not pay anything for this, and often receives an advance against future royalties from the publisher.

There’s a second type of external publishing. Vanity publishing is when the author pays a company to accept their manuscript and do all the things a publishing house does for free. Vanity companies have no credibility in the industry, and often the author pays with no chance of recuperating the cost through sales.

Self-publishing, on the other hand, is when the author takes on the entire publication process themselves; she looks after editing, typesetting, cover design, distribution and marketing. She must pay for the printing of the novel and sometimes contracts out for editing and.

Traditional publishing is the holy grail for many writers, but as it becomes harder to break into this tough market, more writers are turning to self-publishing not only because it is more accessible, but because it gives the writer greater control over her work.

Before ebooks and epublishing, self-publishing was a very expensive option for writers, and considered to be a lesser form of publishing. Despite this, some writers such as Matthew Reilly got their big break by self-publishing their first novel. More recently, Amazon has made it painfully easy for writers to publish ebooks through Kindle for virtually no cost, and some authors such as Amanda Hocking have managed to land million-dollar publishing deals by building a loyal readership through Kindle first. Print-on-demand publishing technology has also made the publication of physical books much cheaper than was previously possible, and this has led to the influx of writers choosing to deviate from the traditional path of publication and take their work into their own hands.

Conway’s novel The Treaty is her third self-published title. The science fiction novel is set in the year 2024, and the world is in the midst of a war which has swept the globe for thirteen years. Protagonist David County is on board a luxury cruise ship off the coast of Australia, when the ship is attacked by pirates and David is taken hostage. After being locked up for eleven days, the pirate ship is bombed, and David’s only chance at survival is flinging himself into the freezing ocean.

He awakens on Antarctica, and is taken in by a refugee community sheltering deep inside one of Antarctica’s ice shelves. They call themselves The Treaty. While the eclectic group are at first wary of David, it isn’t long before David starts questioning why this group is here and what their real intentions are. The community is threatened by something valuable which lies buried beneath the ice, something which powerhouse Russia is very interested in.

The plot of The Treaty intrigued me and I was looking forward to delving into the novel, but for me, the book fell a long way short of what I’d anticipated. It can be the case with some self-published works that the author has rushed into publication too soon, without carefully editing and proofreading the manuscript. While it states on the inside cover that the novel was edited by someone other than the author, some glaring oversights remain. There were several typos, and instances where the wrong word had been used. These errors jolted me out of the story, and it was unfortunate that they occurred quite frequently during the first few pages of the book, as they hindered my attempt to become engrossed.

Another major issue I had with the book was with the main character, David. As I was reading, I didn’t feel a thing for him. I didn’t like him, I didn’t hate him, I didn’t care about him, and I wasn’t intrigued by him. It felt as though a completely neutral voice was narrating the story to me, a story which the narrator himself was very detached from. This is because I had very little sense of who David actually was.

A little way into the novel, David is talking with Treaty member Nana, and she asks him questions he doesn’t want to go into. He subsequently ‘hugged [his] knees’, and it seemed to grossly conflict with my previous image of him. I perceive that kind of body language to be feminine, not masculine. It was at that point I realised I had no notion of who David was at all.

Earlier in the novel, he’d attempted to rescue a young girl from a sinking ship, and to hug his knees seemed out of place withhis previous actions. I couldn’t get any sense of David’s character, and therefore couldn’t decide whether I liked the character or not. As the novel is written in the first-person through David’s eyes, this was a big obstacle in engaging with the story.

Given the huge variety of books available today, it takes an exceptionally original and well-written book to make a mark in this huge market. Plot is, of course, integral in a novel, but when it comes down to it, it is the writing which either brings the story to life or fails to hook the reader. AJ Conway’s The Treaty is an ambitious novel, and while the plot is original and imaginative, it is the writing which really lets this book down.