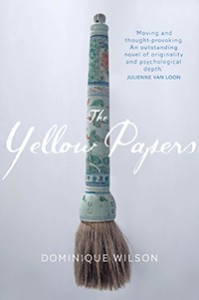 Traditionally when a person dies in China, yellow or gold joss papers are burned to ensure the deceased’s safe passage into the nether world. Thirteen-year-old Chen Mu is studying in America when his mother dies in 1875, and cannot return home to perform the rite. Instead, he swaps his mourning clothes for American suits and turns his back on his homeland for good.

Dominique Wilson’s debut novel, The Yellow Papers, is a hundred-year narrative of displacement, cultural upheaval and political change, but also a story of the unlikely friendships and love that persist, even in such an unstable climate.

At seventeen, Chen Mu is bullied into committing a terrible crime because of his race and flees America aboard a ship bound for Sydney. He finds work in gold rush Australia as a gardener at a wealthy country estate, where he strikes up a friendship with the owner’s grandson, Edward.

Chen Mu’s stories and his obsession with most sacred possession—a jade brush-rest—make Edward curious about his friend’s homeland. On the eve of World War Two, he takes a business trip to China and meets Ming Li, the wife of a wealthy Chinese businessman. They begin a love affair that will last the rest of their lives. Throughout the war and the rise of the Red Army and Chairman Mao, Edward and Ming Li hold tight to the memories of their first days together and try to find a place for their love in a world they no longer recognise.

While Chen Mu and Edward’s stories make up the bulk of the narrative, it is Ming Li’s that is perhaps the most moving. Though she suffers the most, she is a source of strength. Chen Mu and Edward leave their homelands but she remains through war and political upheaval. Like Chen Mu’s jade brush-rest, she is outwardly beautiful and gentle, but proves solid, overcoming great loss and changes in circumstance to move from wife to pampered mistress to independent businesswoman.

The Yellow Papers examines China’s cultural upheaval in the 20th Century from four perspectives: Chen Mu, who cannot escape his Chinese heritage, but no longer considers himself Chinese; Edward, the outsider who feels more at home in Shanghai than Sydney; Ming Li, who feels bound by her family to stay in China, but struggles to survive, and Ming Li’s grandson, Huang Ho, who considers the turmoil necessary to rebuild China.

Through these multiple voices from different generations Wilson challenges stereotypes and perceived cultural norms to remind us that national identity is not something fixed, and is always undermined by the stories it omits.

Wilson further explores China’s cultural upheaval and how this upheaval was perceived by the west through symbolic objects. The jade brush-rest represents ‘the five essential virtues: compassion, courage, justice and wisdom… And of course, modesty!’ While it acts as a symbol for each throughout the narrative, it is also an artefact of the traditional Chinese culture that so values these virtues, and its movement through the story charts changing perceptions towards that culture: something practised, then something cherished by those who do not fully understand it and finally something to be destroyed by those who reject it.

The yellow of the joss papers, too, appears throughout the story. Chen Mu, who cannot burn the papers for his mother later delivers yellow wartime telegrams in Australia, informing families of the death of their sons and husbands. Hung Ho, though determined to fight in the Red Army, is named for China’s Yellow River. In the aftermath of war in a dingy hotel room with an American sailor, Ming Li’s skin has a ‘jaundiced glow’. The characters’ link with China and their heritage is something they carry, willing or not, and their relationship with this heritage is something they must continue to negotiate throughout their lives.

The Yellow Papers is a moving read with broad scope. Wilson’s characters, particularly Chen Mu and Ming Li, are rounded and sympathetic, allowing Wilson to frame large and often abstract ideas of cultural identity, unrest and displacement through individual and personal stories. It’s a work that reminds us that culture is about people and that ideology affects the individual.

You can pick up a copy of The Yellow Papers here.