lip lit: writing to the wire 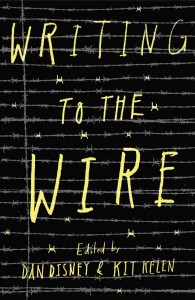 Writing to the Wire is a collection of poems about Australia’s treatment of asylum seekers and refugees. Featuring poetry from academics, writers, refugee advocates and refugees themselves, it is a powerful look at our national identity, namely, who we are and who we could be.

The introduction by Julian Burnside sums up the anthology perfectly: ‘Good poetry sees the world in ways which are invisible to most of us – until we read the poems. In doing so, it smuggles uncomfortable ideas into complacent minds.’

The intent of this anthology is not hidden. Rather, it openly and bravely discusses Australia’s refugee policy; the lack of compassion shown to those seeking asylum by both our politicians and the Australian public at large; as well as demonstrating the myriad of thoughts, dreams and emotions contained in human beings the world over, regardless of culture or race.

One of the best ways to restore empathy in a society that has learned to harden its heart against those in need is to remind it of our shared humanity. Writing to the Wire does just this; by concentrating on the individual stories behind the faceless groups so often shown in the media, it becomes harder to dehumanise asylum seekers. They are no longer just ‘boat people’, but individuals with their own stories – ones who we, through our cruel policies, are forcing to be defined by one moment in their life (seeking asylum), rather than the myriad experiences that came before it.

The poetry in this collection goes further than many of the articles and opinion pieces I’ve read about Australia’s treatment of asylum seekers – it breaks through the ‘you said this, they did that’ arguments and reaches straight into the heart of the matter: these are human beings, not ‘asylum seekers’, ‘refugees’, ‘boat people’, ‘terrorists’, ‘queue-jumpers’, ‘illiterates’, or any other of the labels we thrust upon them that serve to create an ‘us vs them’ mentality. As Kevin Brophy writes in his poem From the Book of Examples:

You have made an example of me

for I should not have run so quickly

when my husband was killed

and my older brother too –

no, I should not have escaped,

I should have queued

or appealed to you in a letter

Brophy’s poem doesn’t touch on the fact that there is no real queue for asylum seekers to join; it doesn’t need to. This poem does in a couple of lines what many articles debunking the queue-jumper myth have not managed – it renders the entire idea of queuing ridiculous.

The most moving poems were, unsurprisingly, written by those seeking asylum themselves. Though there were many amazing poems in this collection, two in particular stood out for me. The first was called One Minute of Silence by S., an anonymous author currently seeking asylum in Australia. The last few lines read:

One minute of silence

For the untold stories

and the feeling we are always ignored.

The second poem I felt particularly drawn to was written by Ravi, a Tamil poet and artist who was detained in Nauru for three years. This collection was published while he was still in detention, though he has since been granted asylum and is currently living in Australia. Ravi recently published his own collection of poetry entitled ‘From Hell to Hell’ and you can find a video of him talking about it here.

One of Ravi’s poems in this collection is called ‘My time is in your hand’, ending with lines that are in equal parts moving and shaming:

Day and night I cry before you.

You have put me in the depths of the pit.

You have caused my companions to shun me.

Your weariness has swept over me.

I am helpless now.

My time is in your hand.

However, this collection not only shows the impact of Australia’s refugee policy on those seeking asylum; it also talks about ways forward. It tugs at your heartstrings and then empowers you, demonstrating that we can all contribute to making Australia a more compassionate and welcoming place.

Writing to the Wire ed. by Dan Disney and Kit Kelen